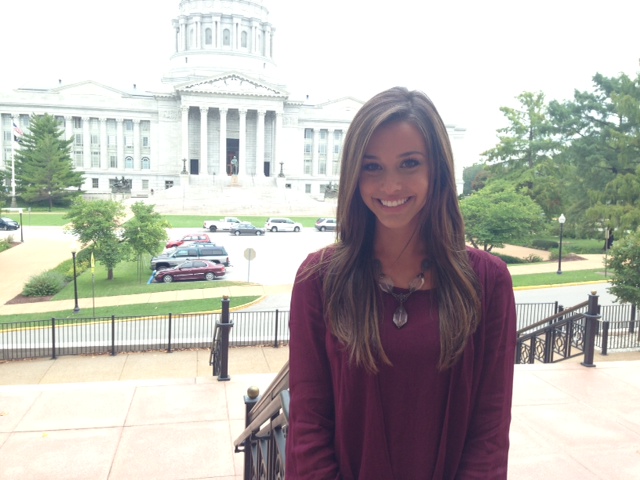 Hanna Battah began her reporting career on the wrong side of the interviewing table.  Featured in Politics in Minnesota: Capitol Report for her leadership in student government work, Battah found her media and government interests collide.  As a Missouri School of Journalism student, she is pursuing a degree in Radio-Television Anchoring and Reporting with an Economics minor.  She started reporting at the MU campus sports station, MUTV 23Sports. There she worked in production, filming, editing, web writing and reporting on the Missouri Tigers. She continued sports reporting, but started in news with NBC-affiliate, KOMU-TV. The Minnesota native returned home to work at WCCO-TV in the news department.  She interned with the CBS Minneapolis station for the summer before classes resumed.  As an ambassador for Missouri's School of Journalism, Battah continues her work with the university while reporting at the Missouri State Capitol for MDN. Some of her reporting portfolio is accessible at her professional website.

My economics minor has been useful for two main things:

1. Giving me knowledge to understand the nature of business exchanges in the U.S. and world economies

2. Pushing me to pursue a cost-benefit analysis in too many decisions I make

Last May I made a cost benefit analysis chart, weighing the outcome of spending 40% of my school days outside of the University of Missouri.  While I knew work in politics has always been my passion, how could I learn about journalism over 30 miles away from the Missouri School of Journalism?

Obviously my fears didn’t linger enough to stray me from what I felt was an audacious move.  I would be spending more than 5 times the amount (yes, I attempted the math) working than I would be spending had I chose to stay in Columbia and create radio stories on campus.  Nonetheless, I found the added time I have poured into my job as a reporter for Phill Brooks at the state Capitol has directly correlated to my growth as a professional.

I know it isn’t the end of the semester yet, but I was faced with a decision this week that put this reflection on my mind: would I want to spend and equal amount of time reporting far from Columbia with a heavier class load? The cost-benefit analysis this time is a no-brainer: absolutely.

I would push any and every broadcast journalism student to take this route and embrace the essence of the “Missouri Method.” While it is not a comfortable decision leaving a college town and entering what I call “the political jungle,” it has been the best move I have made since enrolling at the University of Missouri.

Economics and journalism aren’t so different after all.  In a market-based economy, the businesses with the most competitive edge prosper.  In journalism, the only variation to the business market is those who succeed carry their competitive nature alongside their dedication to the craft.

I was sifting through the pages of my notes last week, only to find more numbers written than words.

As much as journalism is a words game, I'd like to consider myself a bit of a statician. This is because I can almost always predict which organizations/ agencies/ people I will get an interview response, and which will never give me a quote. Last week, I called over 10 different organizations on different stories without a response. The hours I spent searching for more people to call and reading on potential new stories almost ended up being the takeaway of my shift.

Finally, I got a response from the Department of Education on a government shutdown story, and later a response from Sen. Kurt Schaefer, R- Columbia, on a death penalty story. Not only was I able to produce double the amount of stories I usually do, I created what I consider to be my best story on Missouri's death penalty thus far.

It might sound pessimistic to say I expect most officials to not respond to my phone calls or inquiries. I understand some issues are difficult to discuss publicly. But recently, I've come to appreciate those who are willing to speak to a journalist about these topics because they will affect the public regardless. I am thankful for my best interviewing subjects, who coincidentally are the same ones who consisently remain transparent with journalists.

Good Vibes
Posted 10/11/2013:  I look forward to the interaction when someone asks me what I am pursuing with my degree in broadcast journalism. The only thing almost as enjoyable as living my passion is talking about it.  But I can with certainty expect that every once in a while I meet someone who cautions me about the low wages they think I'll earn, long hours I'll be working-- I'm waiting for someone to hand me gifts for the holidays they say I'll miss out on!

This goes without saying, but the people who inquire about my atypical pursuit almost never studied journalism.

Since I decided to attend the Missouri School of Journalism I have thrived from these small encounters.  I've been reminded after my 8 hour shifts at the state Capitol that the work I'm doing isn't for everyone. A few times a week I drive from Jefferson City to Columbia, Columbia to Jefferson City-- and repeat.

I think the competitive nature of this field was the impetus of my interest.  I have seen that slowly translate into the quality of work I produce, and it couldn't be more rewarding.

Besides, who doesn't love a little challenge?

Investigative Journalist
Posted 10/04/2013:  If you asked me about my day at work after each of my shifts this week, you'd think I have two completely different jobs.

On Monday, I researched leading news in Missouri and found the Bagnell Dam transformer replacement story.  I was able to find a project engineer to give me my quotes early in the morning, and turn around a print story and three radio wraps in just a few hours.

Wednesday, however, brought completely new challenges.  I attended a senate interim committee meeting, discussing Medicaid reform and potential expansion. They selected researchers and others to address the issue from different angles: economically, law enforcement's role, medically, etc. What I found was the story I eventually produced would have no conclusion.  The issue of health care, cost, and coverage is-- and might always be-- an ongoing issue.

On the journalism side, I discovered underlying stories that I don't think are addressed enough.  Related to health, should police officers have the training to determine whether someone is mentally unstable or not? Is it always better for an employee to have insurance covered by an employer, or would it give them better care to be covered through Medicaid?  In some ways we monitor fraud by health organizations, but do we ever monitor the customers of these services?

The bad news is I don't think I was the only person at the hearing with numerous questions like these, but the good news is I'm not afraid to find the answers.

Coverage Outside the State Capitol
Posted 09/23/2013:  One of my favorite aspects about journalism is becoming a short-lived expert on each subject I report. This week, I found my niche in the health beat reporting. In a day's shift, I learned so much about the health climate in Missouri. Health reporting is relatively new for me, but I was able to connect my findings to discussions in the political world. My roommates might get sick of hearing me discuss the Missouri immunization rate (no pun intended), but I will forever find the daily lessons to be the best job perks of doing what I love.
Jumping Head First
Posted 09/16/2013:

What better way to begin learning about Missouri's political landscape than jumping into the Senate and House chambers during veto session?  Our newsroom covered the historic session, which concluded in over a third of Governor Jay Nixon's vetos being overridden.

I focused on the gun-nullification bill, which passed in the House with exactly enough votes, but failed in the senate (despite the Republican supermajority). I was eager to cover this issue because I had written a previous story on Ron Richard's statement earlier in the week about not supporting his party, in addition to the national attention it grabbed.  I learned during the veto session a reporter with Al Jazeera America attended the session.

A large voice during the debate was Republican Brian Nieves.  He also spoke during the debate on the bill he sponsored, later characterized as being anti-Sharia Law. Whether critics consider this law to be anti-Islamist or not, I took a good lesson from his arguement.  The way journalists portray people, events, laws, or beliefs is pivotal to the effect they have on the public.  Basically, if one journalist misportrays anything, it can snowball into something much worse.  As a reliable source, I hope reporters at least awknowledge Nieves' concern that the bill  script was misinterpreted and-- whether you agree with him or not-- at least triple check next time they publish anything that has one itty-bitty chance of misleading the public.

I know I will.