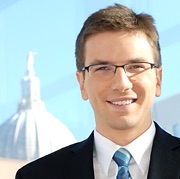 Theo Keith is the political reporter for WITI-TV in Milwaukee, Wisconsin. He covers election campaigns, the Wisconsin Legislature, and Milwaukee city and county government.

His work has twice won Emmy awards. In 2017, Theo won for an investigation into how much time then-Milwaukee County Sheriff David Clarke had been absent from the county. In 2016, it was his breaking news coverage of a massive fire. He has also won a regional Edward R. Murrow award in 2013 for his reporting on problem panhandlers.

Prior to joining WITI, Theo was the political reporter for WAVE-TV in Louisville, Kentucky. He followed the presidential campaign of U.S. Sen. Rand Paul and the ascent of Sen. McConnell to majority leader. He investigated corruption within local governments, leading to multiple changes.

Previously, he covered the historic recall of Gov. Scott Walker as a reporter at WISC-TV in Madison, Wisconsin. There, Theo reported on Rep. Ryan as he made a bid for the vice presidency in 2012. His work led to a new state law requiring independent investigations after police shootings.

Theo is a proud defender of open records and open meetings laws, and he believes in holding elected officials accountable on behalf of the voters who elected them.

Theo is from Saginaw, Michigan. He graduated from the University of Missouri with degrees in journalism and political science. His first statehouse job was at MDN, where he worked from 2009-2011.