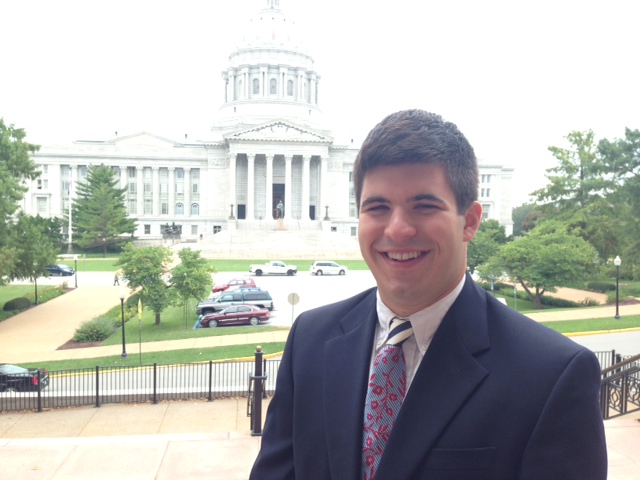 Creighton Hayes was born in Nashville, Tennessee and lived in the state until he was 13 years-old. He and his family then moved to rural Pennsylvania where he attended high school and lived there until he left to pursue a degree at the University of Missouri. Creighton is a junior studying Radio/Television Anchoring and Reporting and minoring in Business.

His previous journalism experience began in high school when he wrote for the school newspaper, and called play-by-play for the local youth football team. While in college, Creighton worked as a reporter for the Mizzou campus TV station, MUTV, where he would go on to host a weekly sports show called Tailgaters. Fall 2013 is his first semester with Missouri Digital News.

Creighton stays involved at MU by working with university staff on the Freshman Male Housing Task Force and being a member of the Alpha Tau Omega fraternity.

After graduating in May of 2015, Creighton hopes to work as a television sports reporter and eventually work his way to a network anchor.

Posted 11/15/2013:  This past Tuesday night, 29 year-old Ryan Ferguson walked out of the Jefferson City Correctional Center as a free man.

His release comes 10 years after his incarceration.

Ferguson was jailed after being found guilty of the 2004 murder of Kent Heitholt, the Columbia-Tribune sports editor.

It's an interesting situation for us (Mid-Missourians) to be surrounded by. Ferguson has never sent a text message, owned a smartphone, earned a college education or even posted a Facebook status )according to the Free Ryan Ferguson website).

How does a man who has been locked up for a third of his life  adjust to a rapidly changing world so suddenly?

It's almost a real life version of "Red", the old man in the Shawshank Redemption, who now lives in a world totally different than the one he once knew.

Regardless, it will be interesting to see how Ferguson adapts to a new world, foreign to anything he's ever know.

Apparently it also saves your life (at least prolongs it) if you are sentenced to death by the state of Missouri.

This is the situation that death row inmate Allen Nicklasson finds himself in.

Nicklasson was convicted in Lafayette County, Mo. for killing a man who stopped to help him with car troubles off of I-70. He later killed two more "Good Samaritans" in Arizona.

The execution of Nicklasson was delayed due to questions surrounding the use of Propofol for that purpose. The drug has never been used to put someone to death and the European Union, where the drug is made, is highly against capital punishment.

The EU went as far as to threaten the United States with cutting it's supply of the drug, which would cause a huge shortage nation wide.

The threat led many Anesthesiologist groups in to pressuring Missouri not to pursue propofol as a mean of execution for Nicklasson.

Governor Nixon eventually haulted the execution, but the delay raises many questions for the future of the death penalty in Missouri.

Where does the state go from here?

Currently there is no functional gas chamber in the state and no drug is approved for injection, so Missouri is in a bit of a pickle on how to carry out it's obligation of carrying out death penalties.

The coming weeks will tell where the state will head, it's sure to be an interesting debate.

These stories aren't given to you with facts, you can't turn them in a day, and you definitely DO NOT want to be wrong if you report them.

I had this exact situation this week.

A source that works in a state public school said that there was a chance that some high-up member of a state department might be working a compromise with an initiative petition group.

Obviously this is BIG news if accurate.

So as you can probably guess, Phill throws me in the meat grinder and tells me to "figure it out" as he leaves to go home.

Perfect. Here I am with a potentially big story and nothing but some hearsay from a elementary school teacher and a few phone numbers.

It's nearly the end of the day at this point but I make the calls, the rumor gains a little support, but no one has certainty that it's true.

I still don't know if anyone actually knows anything, but I asked the right questions and I got some people to start asking questions of their own.

It will be interesting to see how this story develops, but one thing is certain: you don't report through the rumor mill without a little luck and help from others.

Government is shutdown, but Politics are in full swing.
Posted 10/04/2013:  I focused the majority of my week with MDN covering the potential government shutdown and then the actual shutdown. The thing that stood at to me the most was the blatant lack of accountability in our elected officials. Democrats are blaming Republicans for what they call the "#GOPShutdown," while Republicans blame Democrats for not working with the GOP to resolve the issue.

Either way you look at it, Congress is at fault.

I think Missouri Representative Ann Wagner captured that feeling best with her statement on the House floor earlier this week.

“Congress didn’t get the job done and those who make the laws should live by the law,” said Wagner

Her sentiment was agreed with by over 91 legislators who refused their pay during the shutdown.

I guess what I'm getting at is that government needs less politics and more leadership, we'll see who emerges as one during the next few weeks as the shutdown continues.

Navigating your way through Statehouse reporting
Posted 09/27/2013:  When I first signed up for this gig I thought I knew a thing or two about government, politics, and the events that run through them ... boy was I wrong.

This week I had the chance to look into one of the biggest matters facing our country in the coming weeks - the implementation of Obamacare. As I started the process I quickly realized that I had jumped out a little farther than I was ready for. Interviewing people for this story (the first calls) was the first time that I felt legitimately stupid. I knew NOTHING about healthcare and the Obamacare mandates.

Luckily I caught a break.

I found the necessary background information, talked to the right people, and learned to do my homework - life became way easier.

I guess the important thing about reporting is just that. KNOW what you need to know, ask the questions you need to in order to understand, and don't be afraid of people because of their title or position ...

... well, unless you're in the basement bathroom and a fully loaded gun happens to be laying there, then you can be afraid.

Last week was a historical day nationally, state-wide, and for me personally.

Nationally it was the 12th anniversary of the September, 11 attacks. It's humbling to remember the exactly where I was, who I was with, and what was happening at that moment so long ago. At the time it was harder to understand, as I was just in the 3rd grade, but now I have a much deeper understanding and can true appreciate the heroes of that day and of days since.

September 11, 2013 also marked a historic day in the halls of the Missouri statehouse. Governor Nixon had 10, I repeat TEN, of his vetoes overridden. That day was the first time I had ever seen legislators is action and, honestly, I had mixed reactions.

The atmoshpere was buzzing, reporters filled the press row, citizens filed in to the chamber galleries and all eyes were set on two controversial bills.

House Bill 253 (a massive tax cut bill) was the first of the two to hit the floor. I was responsible for this bill and I was a bit over my head with it. Thankfully the Representatives debated the bill for nearly two hours, so I had time to catch up.

The bill never made it to the Senate chambers as the house voted to sustain Nixon's veto.

If I learned anything from the day it's this: reporting is something that you have to have a passion for. You have to stick with it, regardless of what you know, and adapt to what you learn. Sometimes you bite off just a bit more than  you can chew, but struggling to get it down makes the bite worth it.