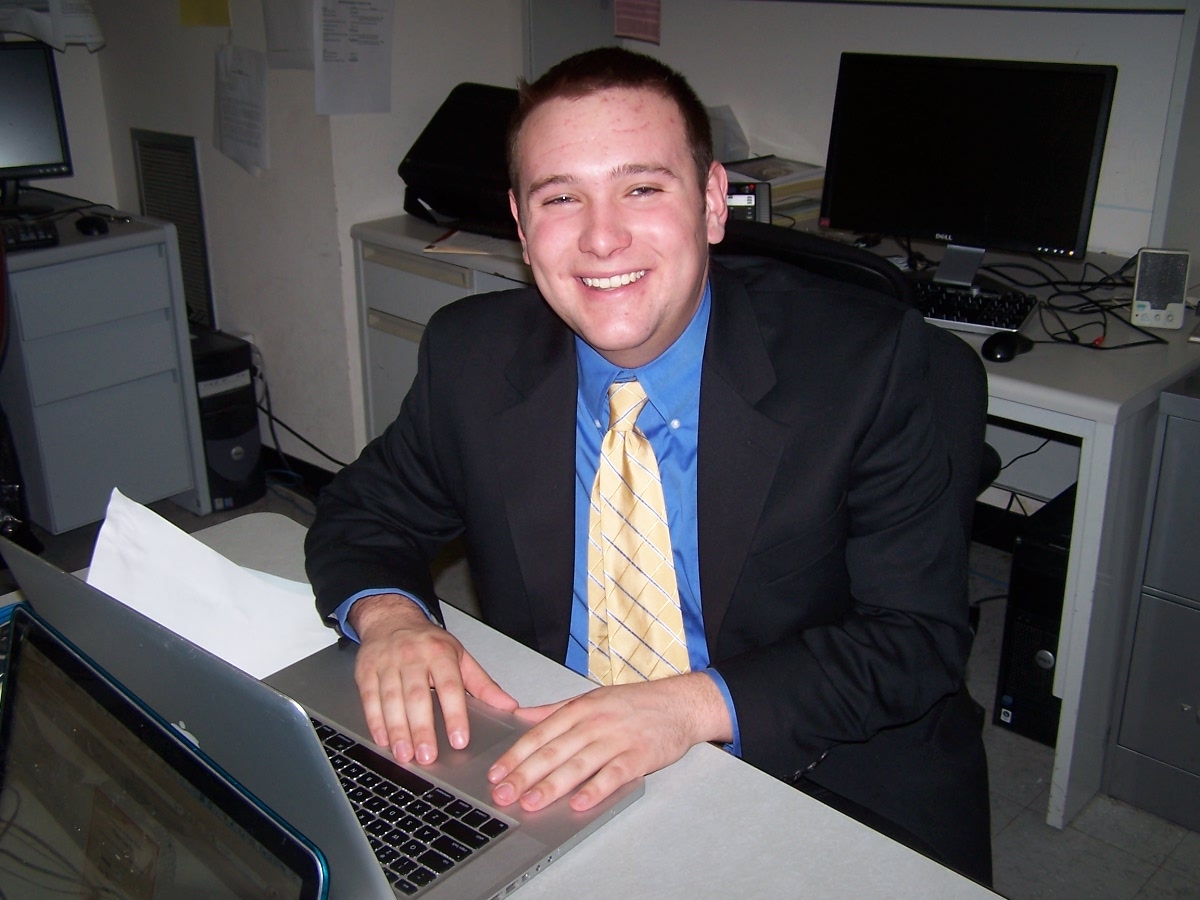 Brian Bondus is a sophomore at the University of Missouri-Columbia majoring in Broadcast Journalism with a minor in business.  He works for Missouri Digital News in Jefferson City and KOMU 8 News in Columbia.

Brian has worked at KOMU since arriving at Mizzou in August 2009.  He started as a production assistant and worked his way up to anchoring and producing the Thursday morning sportscast.   Brian loves telling any good story, but has a passion for sports.

Brian Bondus is excited to get back into radio.  At the Indiana Association of School Broadcaster’s conference in 2009 he received first place in the in-depth reporting and interviewing categories for radio.  He also came in second for on air-personality with his co-host.

Brian is excited for the opportunity to report from the Capitol this year and will do his best to provide the best news possible!

Stories by Brian Bondus in 2011 include:
Brian Bondus's Blog in 2011
Coming to Closure

The end of the legislative session is quickly approaching.  Now big bills are pretty much the only things seeing time on the floor of either body.  No bills proposed by Democrats are making any progress.

This week I covered the House. The mood was relatively light.  The previous night the budget leaders for each body had a conference committee and formed a compromise.  The House passed 12 bills dealing with the budget then immediately sent those to the Senate. The Senate passed all 12 as well and they were on the Governors desk by the end of the day Thursday.  They had to finalize the budget before the deadline Friday at 5.

This week I attended a Senate Committee hearing. They discussed a multitude of bills, but the big three were an all English driving test, secret ballot voting for employees to join a union, and the right to pray in public schools and government buildings.   All three made it out of the committee.

Sitting in the hearing room I felt much more comfortable than before.  I remember my first day reporting in the same hearing room. I showed up late, did not get a seat, and barely knew how to record.  This time I walked in, checked the audio, and knew the Senators as they walked in.  Also, the topics they discussed were issues I saw earlier on in the semester. It’s amazing how much can change in just three months. Now, I feel I could walk into any State Capitol and start reporting right away.

This week was very exciting, because I got my first print story published.  I attended the House Redistricting Committee meeting on Tuesday.   The committee had to eliminate one congressional district because Missouri lost a seat due to the 2010 census. The Committee Chairman Rep. John Diehl, R-St. Louis County allowed anyone who wanted to the ability to propose a map. Two maps were primarily discussed at the meeting. One proposed by Diehl, and the other proposal came from Ron Casey, D-Crystal City. Casey represents the district in which the Senate and House maps eliminate.  The seat currently belongs to Democratic U.S. Representative Russ Carnahan.

The Senate committee passed a version of the new congressional districts the previous day. The map the House passed was very similar to the one passed in the Senate.  There is a less than a two percent difference between the two maps.   In the House, the map hit the  floor the next day and went through by a vote 106-53. Now we will wait to see what the Senate does.

This week was the legislature’s spring break and relatively quiet around the Capitol.  This gave me a great opportunity to work and finish my feature.  I focused my piece on HB 257 that would eliminate the Sentencing Advisory Commission.   Rep. Stanley Cox, R-Sedalia, sponsored the bill and says the sentences are too lenient.  Supporters of the commission argue that they sentences aren’t mandatory and the commission serves other important purposes.  My piece goes into more depth on both sides.  Now, I'm excited for the lawmakers to return and get back to a normal schedule.

This week was my first day sitting in for a House session.  It was exciting and scary at the same time.  Representative Taylor from St. Louis County had chest pains and left the chamber.  The House adjourned and Taylor was carried out on a stretcher.  Taylor was diagnosed with diabetes and will return to the House after legislative spring break.

Despite all of that excitement, the main thing discussed was legislation that would repeal Prop B proposed by R-Stanley Cox from Sedalia.  Leading House Republicans made some amendments to the bill and then decided not to vote.  This is most likely because they will wait and just go with the Senate bill.   The Senate passed similar legislation last week, which will go to a House committee on March 29th.

Also, I continued to work on my feature project on alternative sentencing in Missouri.  I talked with a Missouri criminologist, prosecutor, and Representative Stanley Cox.   Cox proposed a bill that would eliminate the Sentencing Advisory Commission in Missouri. The commission gives recommended sentences to judges, and Cox says they are too lenient.  I’m looking forward to examine how rising prison costs in Missouri have affected sentences.

I’m really excited to be working on my first feature piece for MDN.   I am covering the issue of alternative sentencing in Missouri.   This past week I talked with Supreme Court of Missouri Judge Michael A. Wolff. We talked about drug courts and other avenues for alternative sentences.

This week I will continue to work on my feature.  I plan on gathering some more interviews from a prosecutor, a criminology professor, and possibly a first time offender.  I look forward for the opportunity to dig a little deeper with this story.

This week at the Capitol I saw a complete flip flop by a former Senator.  Joan Bray from St. Louis County was a leading opponent of building a second nuclear power plant in Missouri.  She spoke against it and even wrote about it in an end of the session newsletter in 2009.   Also, that year she voted against a similar bill in a committee hearing.

Now in 2011, she is the president the Consumer Council of Missouri.  She helped draft a bill for a second nuclear plant with Jason Crowell, the sponsor, where more consumer protections are in place.  She says these changes in the bill will help share the risk of building a second plant between the consumer and company.

I learned a valuable lesson this week that I need to get more familiar with past and current statehouse staff.  I am still getting acquainted with Missouri politics and the way things work at the Capitol.   I was not familiar with Joan Bray, and did not realize who she was.  I had no idea what it meant to have her back the bill until after the press conference.  That was a huge part of the story that I could have missed if it had not been for older reporters and the Internet.  As a 21st century reporter I have so much more knowledge at my fingertips than ever before and it’s my responsibility to take full advantage of it.

This week was relatively calm compared to my prior experiences at the Capitol.  I covered a committee hearing on education appropriations.  The committee discussed House bills 2 and 3 and proposed multiple amendments to each. There were a lot of numbers to keep straight.  In the past the “Bright Flight,” program was underfunded and Representative Monticello from St. Louis made it a priority to get its funding up. She got money taken away from the A+ Reading program and failed to get extra funding from AP grants. Another program that received more funding was an early literacy program for first graders who are under the reading level.

One budget cut that didn’t receive an amendment for more funding was higher education. The new budget will decrease the University of Missouri System’s funding by 7 percent. This is what Governor Nixon proposed in his budget. The chairman of the committee, Mike Lair, thinks this will pass in the House and Senate.  Not even Columbia’s own Mary Still proposed an amendment for more funding for the University.  The bill will now go to the budget committee and then to the House floor.

I tried Sonic for the first time after my shift, because it was one of the few places open after I left the Missouri statehouse Tuesday night. What a day it was! I left right after my broadcast one class from the Missouri Journalism School. I got to the Missouri Digital News office at 11:30 and was assigned to the SB 1 and 197 committee hearing. The bill was sponsored by Louann Ridgeway and would not require employees to pay union dues.  The difference between the two bills is that bill 197 has a referendum clause. The committee room was so crowded that they had an overflow room and a TV for viewing outside.  Most of the people who talked for both sides were contractors and skilled workers trade union members. The interesting thing was, if this bill is passed it would most likely bring manufacturing business to Missouri. Not a single person representing the manufacturing industry talked at the hearing.

Three main points came up repeatedly throughout the hearing: 1. Whether or not employees who chose to not pay union dues would receive union benefits. 2. Whether passing the bill would pay lower or higher wages and affect the standard of living in Missouri. 3. To what extent companies take into consideration a state being a right to work state when deciding where to locate factories.  Ridgeway really stressed job creation as the reason for the bill. She says it would bring businesses and people to Missouri.  She said that right to work states are having more people move to them and pointed to the new congressional maps as evidence.

One interesting thing did happen at the hearing.  They were about to end the meeting when Tony Privitera stood up and said he wanted to talk.  He was an opponent of the bill from Kansas City and Louann Ridgeway, the sponsor, asked for him to speak.  The committee let Privitera speak and to be fair also one proponent for the bill.  Still, there was no vote at the hearing.

Tomorrow I start my first shift at the Missouri State Capitol building as a reporter for MDN.  Two weeks ago I took a tour of the Capital, led by Phil Brooks, and was impressed.    I loved the painting in the house lounge, the dome at the top, and met some very friendly people. I was very excited to start reporting last week, but was unable to because of the blizzard.   Columbia got around 18 inches of snow and I had no way of getting to Jeff. City.  There are also supposed to be small flurries tonight in Columbia. I’m not too worried about getting to the Statehouse tomorrow because we are only expected to get 3-4 inches, so for now, “Let It Snow.”