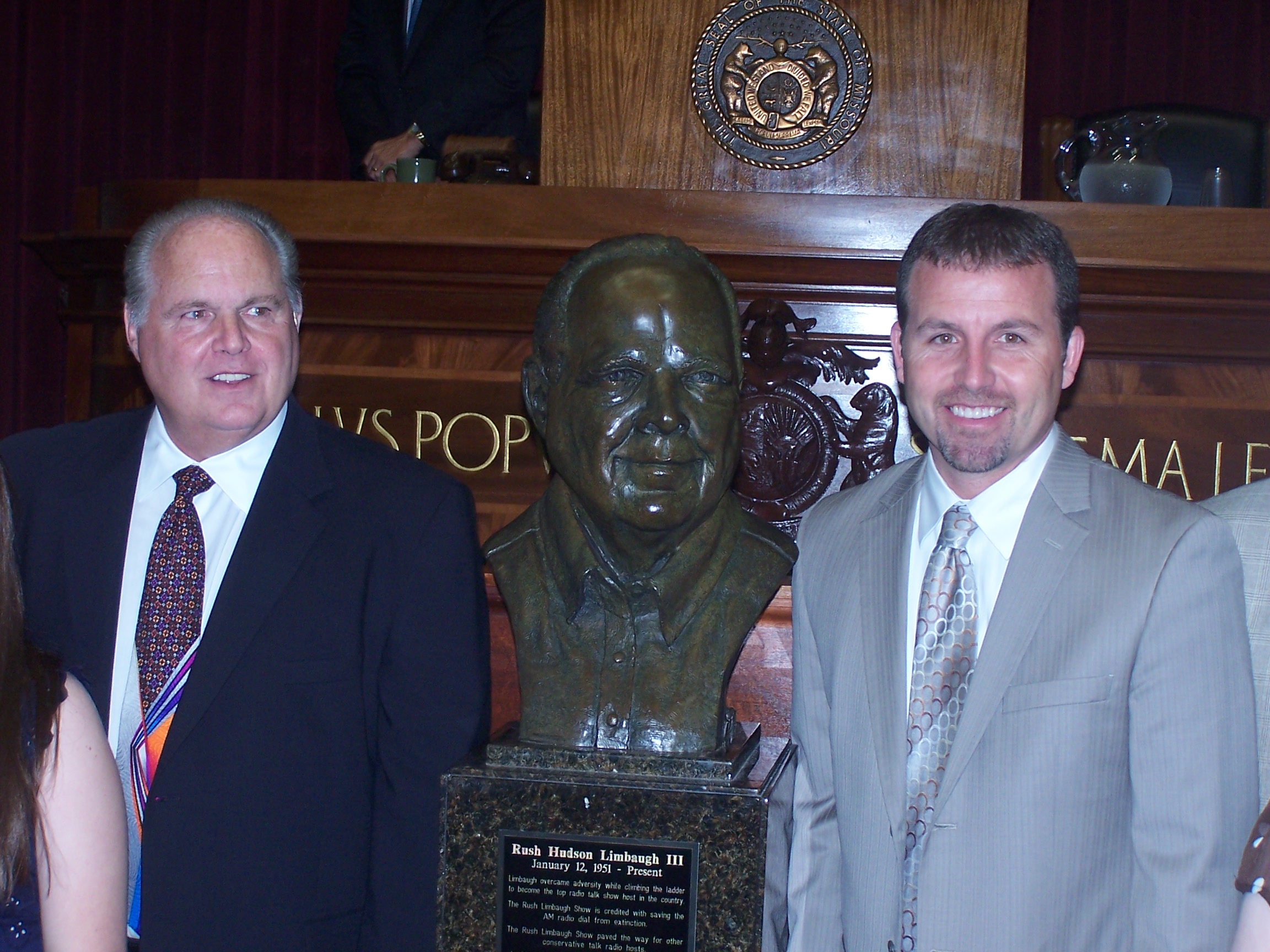 Rush Limbaugh and House Speaker Steve Tilley
JEFFERSON CITY -The first day of the last week for the Missouri legislature's 2012 session was highlighted by armed police guarding the House chamber where a controversial radio talk show host was being honored.

Behind the locked doors of the chamber that was surrounded by more than one dozen police, Rush Limbaugh watched as his bust for the Capitol's Hall of Famous Missourians was unveiled on Monday, May 14.

Shortly after the unveiling, however, Gov. Jay Nixon's administration issued a document raising questions about the House speaker's authority to handpick whose bust can be placed in the Capitol rotunda.

The unveiling of Limbaugh's bust was kept secret from all but invited guests until less than an hour before the ceremony.

While Republican lawmakers were invited, Democrats were not and visitors were blocked from entering. All but one of the doors to the House chamber were locked with armed Highway Patrol and Capitol Police patrolling the hallways outside the chamber.

House Speaker Steve Tilley -- who selected Limbaugh for the honor -- defended the use of armed police to block access."With the controversy involved surrounding, I thought it was acceptable to do an invitation-only event."

Democrats had attacked Tilley's decision to select a person who had broadcast sexual epithets to describe a female college student who sought to testify before a congressional committee.

Limbaugh made reference to the attacks when he addressed attendees at the ceremony. He praised Tilley for standing up to Limbaugh's critics.

"He was tough, he did not give him any quarter, laughed at them when they called his office, which is what you have to do because they're deranged," Limbaugh said to laughter. "Our friends, so called friends on the other side of the aisle, are deranged."

House Democrats quickly attacked the closed-door nature of the ceremony.

"It is quite clear from their handling of the Limbaugh ceremony that Republicans were ashamed of what they were doing and wanted as few people as possible to witness it. When you take great steps to hide what you’re doing, it usually means that you know what you’re doing is wrong," said House Assistant Democratic Leader Tishaura Jones, D-St. Louis.

Shortly after the ceremony, Nixon's office released a document that questioned the legality of Limbaugh's bust being placed in the 3rd floor rotunda, the area termed "The Hall of Famous Missourians."

The undated, three-page, report from the Office of Administration concludes that the Board of Public Buildings "has the statutory authority to determine what artifacts are placed in the Hall of Famous Missourians because of its public location within the Capitol."

The board has three members with Democrats currently in the majority -- Democrats Nixon and Attorney General Chris Koster along with Republican Lt. Gov. Peter Kinder.

Nixon's spokesperson, Scott Holste, refused to comment on the issue, but issued a written statement that the governor looked forward to working with the board "to develop a comprehensive strategy regarding where all busts, statues and other monuments are displayed in the Capitol."

Earlier this year, the House passed a measure that would strip the administration of control over the rotunda where Limbaugh's bust is expected to be placed. But Senate Majority Leader Tom Dempsey, R-St. Charles County, made it clear the bill had no chance in the remaining few days of the legislative session.

"We've got a host of issues to deal with that I think are much more important than deciding who's going to control the rotunda," Dempsey said. "We don't have time for that issue."

More than two months ago, March 8, a majority of House Democrats had signed a letter asking the Nixon administration to prevent Limbaugh's bust from being placed in the rotunda because of his "misogynistic attitudes" in describing the college student on the air as a "slut" and "prostitute." Nixon never publicly responded to the request.

"I'm not speechless, but close to it," Limbaugh said in his remarks to the audience.

"We're all the products of our families. Families define us, determine so much about us. And there are so many in my family that far more deserve to be standing here than I do."

In other legislative action, the legislature renewed efforts on a measure that would restrict lawsuits for occupational diseases against employers.

Legislative leaders defined the bill as the top priority for the final week. Nixon had vetoed similar measures both last year and earlier this year.

Legislative leaders, however, have said Nixon has sent them written communication indicating he was willing to compromise.

A large number of other measures await final legislative approval including a proposal to include cell phones in the "no-call" law restricting telemarketers and a measure to impose a statewide requirement for vaccination of pets for rabies.

The session adjourns at 6pm on Friday, May 18.