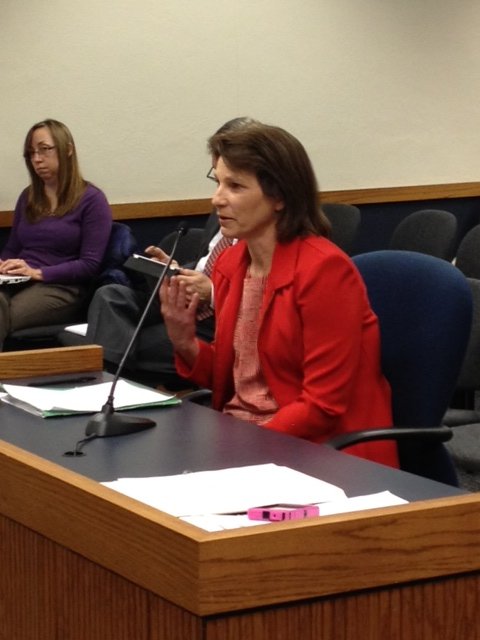 Debbie Thrasher, grandmother of Sam Pratt, testifies in support of the bill.
JEFFERSON CITY - A bill in the Missouri House would impose stricter regulations on unlicensed child care providers. Some witnesses were emotional when talking about how this issue has affected their families.

The bill, also known as "Sam Pratt's Law," would prohibit unlicensed child care providers from providing services if they have pending criminal charges. Sam Pratt was an infant when he died at an in-home daycare provider.

His grandmother, Debbie Thrasher, testified for the House Children and Families Committee in support of the bill. Thrasher owns a licensed child care facility and believes that unlicensed daycare providers should be held to the same standards as those that are licensed.

"She spent one night in jail," Thrasher said.  "The next day she bonded out. By Monday she was babysitting again. The police asked her not to babysit, and she went to see a lawyer and he told her there was no law to keep her from babysitting, even though there's one for licensed caregivers, and one for if it was her own child."

The St. Louis Post-Dispatch reported that from 2007 to 2010, 41 deaths occurred in unlicensed and unregulated child care settings.

If a child care provider has any pending criminal charges that would result in restrictions against a provider with a license, they would be prohibited from providing child care under the bill. Going against the law could mean a misdemeanor charge against the person providing the child care.

Rep. Jay Barnes, R-Jefferson City, provided one rebuttal to the bill.  He expressed the concern that just from the filing of a criminal charge, a provider could lose their business forever.  Barnes asked if there was any requirement for a hearing before the department would take any action against the business.

The bill's sponsor Rep. Linda Black, D-Bonne Terre, responded that she was not sure about this procedure.

The committee did not vote on the bill and is not yet scheduled to take it up again.