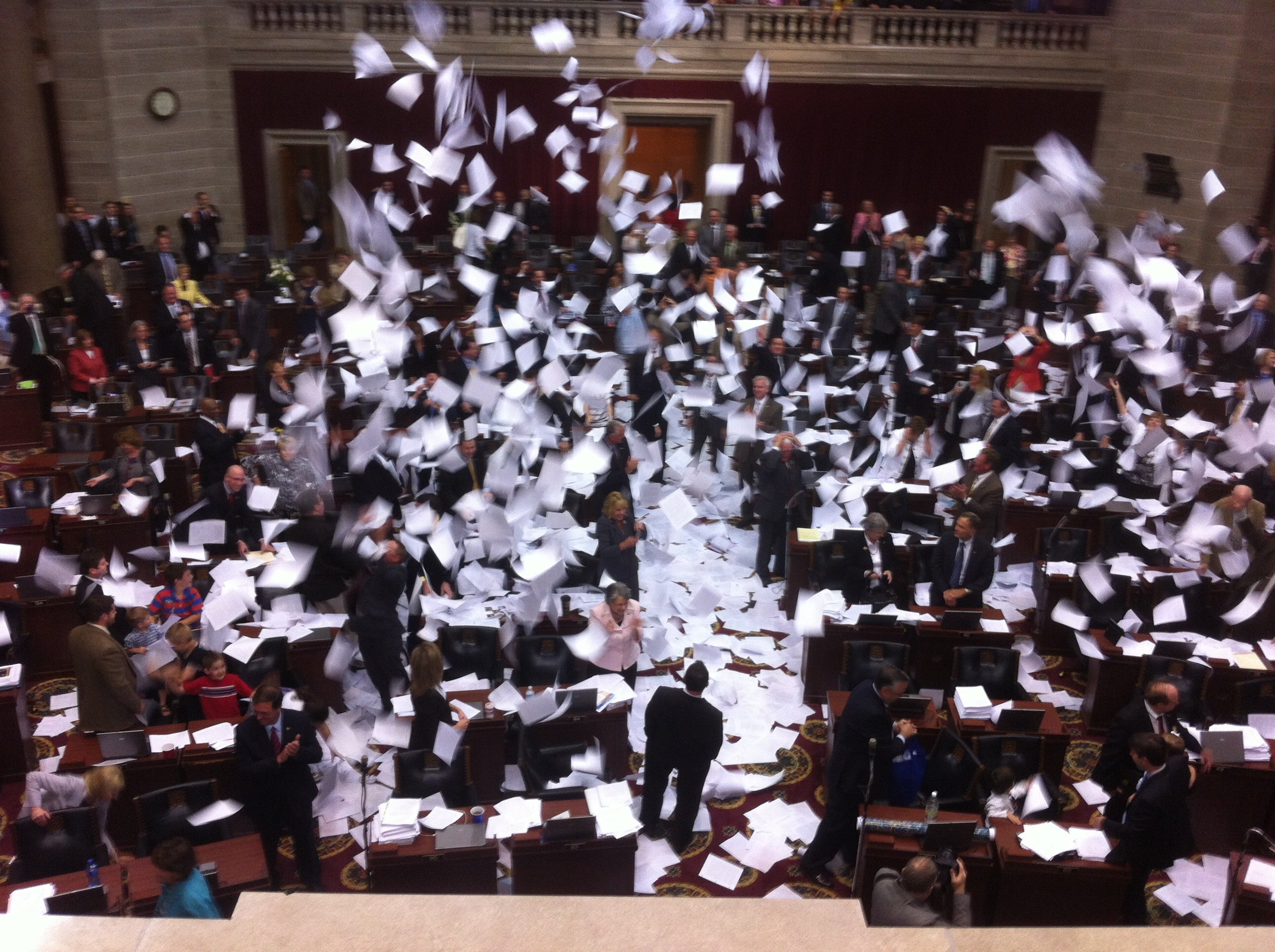 JEFFERSON CITY - Missouri lawmakers head home after a tense legislative session with some of the biggest issues left unresolved.

From the beginning to the end, the session was dominated by fighting among the large Republican majority. Republicans were divided on major education issues such as eliminating teacher tenure.

Before the legislative session closed, the Missouri General Assembly was able to send the state's $24 billion budget on time to Gov. Jay Nixon, but the Senate debate was dominated by late-night filibusters and personal attacks against Senate leadership.

As the legislature entered its final day, many signature issues had already died, but many other bills were sent to Nixon for approval. Measures passed include:

Despite these and other accomplishments, lawmakers fumbled on addressing key issues that had been dubbed priorities for the session.

Although the major items on the agenda failed, lawmakers did achieve what House Speaker Steve Tilley, R-Perryville, called incremental progress.

"I don't think we went forward on education reform on the big ticket issues," Tilley said. "Now I do think we are going to make incremental progress this year with charter school expansion."

As the session came to a close, lawmakers were able to pass an expansion of charter schools in failing school districts. Under current law, charter schools can only be in St. Louis and Kansas City.

"We need to do something to help these kids," said Rep. Rick Stream, R-St. Louis County. "And we don't need to wait until next year or the following year or five years or 10 years down the road. We need to act now to give these kids a quality education."

The bill's fate now lies with Nixon, who called for higher quality charter schools in his State of the State address in January.

A push to allow the state to intervene immediately in the unaccredited Kansas City School District was held up as the session closed, because the Senate did not approve a change to teacher tenure, which would eliminate seniority as a criteria to consider when a district has to lay off teachers.

One of the bigger education issues facing the legislature was providing a fix to Missouri's underfunded public school funding formula. Sen. David Pearce, R-Warrensburg, sponsored measures that would have provided a fix to the funding formula if the state government could not appropriate enough money to fully fund the formula.

Pearce said it was a "major disappointment" that the body had not passed the funding formula fix. Pearce said divisions about the legislation stemmed from each lawmaker's location in the state and the types of schools that were in each district.

At the beginning of the session, Republicans had also proposed various business-backed measures that would limit workplace lawsuits and the amount of damages a worker could receive for disease-related injuries. These measures also stalled in the legislature.

One of these business bills would have placed occupational disease exclusively under workers' compensation coverage while another would have required employees to prove that discrimination was a motivating factor in their termination of employment. The governor vetoed versions of both of these measures, however, requiring Republicans to rethink the bills.

For the workplace discrimination bill, lawmakers eventually endorsed a slimmed-down bill that only applied to workplace whistleblowers. That provision, which stalled in the body, would have limited who could be considered a whistleblower and capped the amount of damages someone could receive if they were fired for taking such action.

On workers' compensation legislation, lawmakers passed a governor-endorsed bill that would prohibit employees from suing their coworkers for accidental on-the-job injuries. Sen. Tom Dempsey, R-St. Charles County, who sponsored the approved, original occupational disease legislation, said that although changing the co-employee liability standards was the most important issue for workers in the state, the other business issues would not go away.

Extensive Democratic-led filibusters in the Senate kept these issues from being fully addressed. These debates also kept a bill to change the prevailing wage from coming to fruition.

Missouri lawmakers took a pass this session on several opportunities to bring in more revenue. A tax amnesty program worth $70 million languished in the Senate despite being passed by the House and used by the governor to balance the state's budget.

Lampe said the Republican-controlled General Assembly refused to consider raising revenue because of populist campaign promises to not raise taxes. Republicans have said that raising the tax on cigarettes would disproportionately affect the poor. Sen. Jason Crowell, R-Cape Girardeau, has dubbed it the "most regressive tax."

Although lawmakers did not address the cigarette tax, voters in Missouri will have their chance to in either the August or November elections; an initiative petition to raise the cigarette tax gained enough signatures to make the ballot.

Lawmakers also did not move on a bill that would allow the state to collect a tax on Internet sales. Conservative estimates note that the state is losing $20 million to $40 million in potential revenue each year by not collecting the tax.


Although senators made a last-minute effort to provide tax credit reform, the measure was dead on arrival in the House after it was attached to an economic development bill that came in response to the collapse of the Mamtek project in Moberly. Rep. Jay Barnes, R-Jefferson City, who sponsored the Mamtek legislation, said he would not touch the Senate-amended bill because he thinks the tax credit language is unconstitutional. Missouri is estimated to redeem about $685 million in tax credits in the 2013 fiscal year.

One of the most controversial issues of the legislative session had nothing to do with lawmaking.

The decision by the House speaker to induct radio personality Rush Limbaugh into the Hall of Famous Missourians sparked outrage from Democrats. Tilley's announcement came shortly after Limbaugh referred to a Georgetown University law student as a "slut" and a "prostitute" for her use of birth control.

Earlier this week, Limbaugh was formally inducted in a closed-door ceremony in which the House chamber doors were locked and Democrats were shut out.

Tilley stood by his decision to induct Limbaugh into the Hall and said he was one of the most recognizable radio hosts in the world. When asked about Limbaugh's statements, Tilley said that not everyone in the Hall was well-liked and that many also had controversial views.

Democrats have petitioned Nixon to not display the bust in the state Capitol rotunda.

Tilley also inducted Buck O'Neil, the first black coach in Major League Baseball, and Dred Scott, the slave who unsuccessfully sued for his freedom, into the Hall of Famous Missourians this year. They join other Missourians including Walt Disney, George Washington Carver and Laura Ingalls Wilder.

A common theme on the legislative session was work on so-called wedge issues, which are designed to clearly distinguish the two political parties.

Hours of the 2012 legislative session were dominated by debate over these type of issues, many focusing on objections to federal laws and requirements.

Issues such as abortion, gun control, contraceptives and the federal health care law, which currently awaits a ruling from the U.S. Supreme Court, were debated at length by lawmakers.

On Friday, the Senate tried but ultimately failed to pass a bill criminalizing anyone trying to enforce the federal health care law. Republican supporters said Missouri voters spoke against the law in 2010 when they overwhelmingly voted to prohibit enforcement of the law. Democrats blocked a vote on the bill just hours before the session drew to a close.

Legislators also sent a bill that would prohibit implementing health insurance exchanges without a vote of the people. The exchange is part of the federal health care law and requires states to set up a computer system where people can compare prices for health insurance. Rep. Ryan Silvey, R-Kansas City, said the bill was a way to place a legislative check on the governor.

"This is about reigning in a governor who is out of control," Silvey said.

The issue of whether or not to set up a health exchange will now be decided by Missouri voters in November.

Some lawmakers have blamed the shortcomings of the legislative session on the impact of term limits.

Two members of the Republican leadership, the House speaker and Senate president pro tem, were forced out of the legislature this year due to term limits.

"Being in here is like going to school in a foreign country and having to learn a new language and you only have eight years to do it," said Lampe, who is also term limited out of office.

The House speaker said he continues to support limiting elected officials to serving eight years in the House and another eight in the Senate. He said that without term limits someone like him could have never been elected.

Mayer, who said he initially supported term limits, argued the subject needs to be revisited

"I think it is something that should be reconsidered. I think the time period is short," Mayer said.