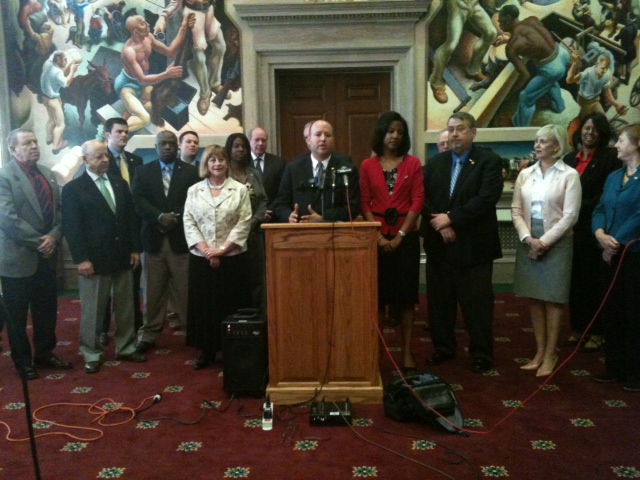 The caucus said during a press conference Monday, they hope to reform ethical standards in Missouri's state government.

House Minority Leader Mike Talboy, D-Kansas City, said Missouri citizens expect transparency and accountability, but he said these things do not exist in the state right now when it comes to campaigns and in the political and ethical structure the state has in place.

Jones said she hopes the bill will be made a priority.

Speaker of the House, Steven Tilley R-Perryville, said he would treat the bill like all other bills, and he would not make it a priority. He said he has always been opposed to campaign contribution limits. He said he believes the system we have now is open, transparent and accountable.

Republican Senate leadership said they do not believe this bill will go anywhere in the next two months of session, which ends May 18.

The bill would cap the amount of a single contribution  at $5,000. A donation exceeding $2,000 must be disclosed electronically to the commission within 48 hours of receipt.

The bill would also:

Jones said the bill would not allow campaign contributions to be invested in a money market or certificate of deposit account because campaign money should only be used for campaigns, not to invest and provide profit.

Tilley previously invested $900,000 in campaign funds in 12,000 shares of stock in Reliable Community Bancshares Inc. Former Speaker of the House Rod Jetton provided a political consulting service to legislators who had bills that were directly affected by Jetton's decisions.

In 2010, a similar comprehensive ethics bill was passed.

"The majority party played games with it, stripped it of its most important provisions, put it in another bill, and dubbed it as 'the greatest ethics bill in the universe,'" Jones said.

Earlier in the year, the Missouri Supreme Court reversed the law.

"We were elected to be serious about ethic reform and not play games," Jones said. "If Republicans won't act, then Democrats will."

Tilley said he believes the state made a lot of progress in the previous ethics bill that was passed, but thrown out by the courts.

Jones said ethics laws are a priority to Missouri citizens. She said she is disappointed to hear that Tilley would not make the bill a priority.

"We would hope the majority party is serious about reform," Jones said.

The bill was filed on Monday.