Bill would force drug dealers to pay taxes on their "Capital"
From Missouri Digital News: https://mdn.org

Bill would force drug dealers to pay taxes on their "Capital" 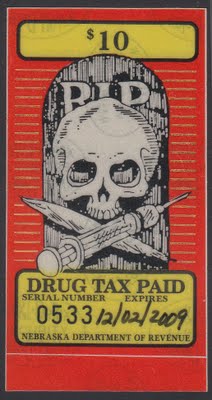 Wrap: Roorda, a Democrat from Barnhart has filed a bill that would force drug dealers to buy state stamps for illigal drugs.

If a dealer is caught with drugs that don't have stamps, they would have to pay a tax penalty on top of criminal charges.

Roorda says that could bring Missouri revenue and help with the state's drug problem.

A Kansas Department of Revenue spokeswoman says Kansas rakes in about one million dollars a year from tax penalties on dealers in cuffs.

Wrap: Democrat Jeff Roorda has prefiled a bill that would force drug dealers to purchase state stamps to sell their illegal drugs.

Roorda says the program will be similar to successful programs in other states.

Kansas Department of Revenue spokeswoman Jeannine says their program has made Kansas about one million dollars each year, but drug dealers don't buy the stamps.

Roorda says the revenue to Missouri would come mostly from the penalty enforced on dealers who get caught without the stamps.

Anyone caught dealing without the stamps would be forced to pay a tax penalty.

Roorda, who is from Barnhart, says currently, only illegal assets are allowed to be confiscated by the government and this bill would make it easier to to catch dealers.

Roorda says the bill would allow the state to sieze any assets a dealer has if they are unable to afford the tax.