Prop B under fire again in Missouri's Senate
From Missouri Digital News: https://mdn.org

Prop B under fire again in Missouri's Senate 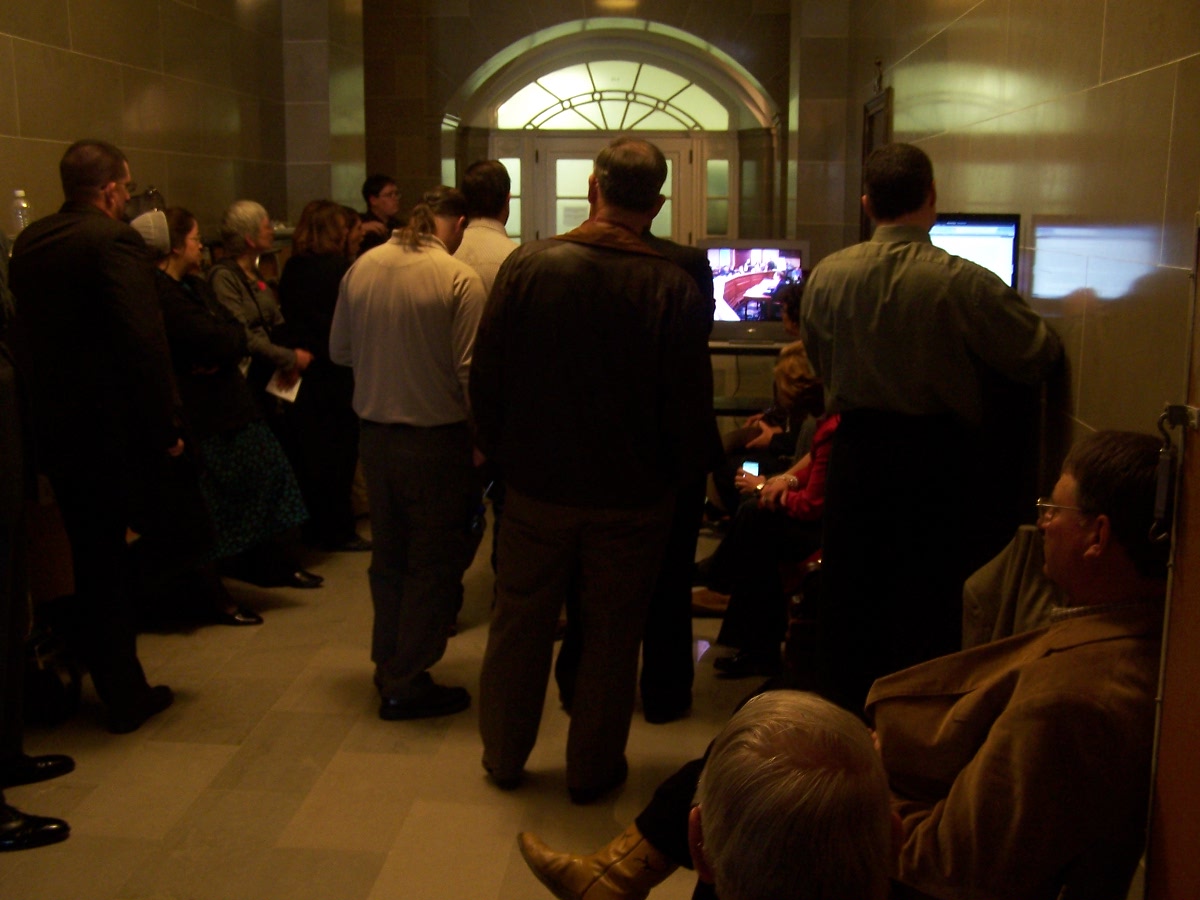 Those who would not fit into committee hearing rooms crowded into the hallways of the Capitol, where they watch the proceedings of the dog breeder bill hearing streamed on TVs.
See Related Stories

JEFFERSON CITY - An overflow of dozens of dog breeders and dog breeding supporters spilled out of committee hearing rooms and jammed the hallways of Missouri's Capitol for two days this week, calling upon lawmakers to undo what Missouri voters approved in November.

"Proposition B will flat out put me out of business," said Hupert Lavy, a longtime dog breeder of Silex, Mo.

Lavy projects that under the current law, his kennel will be bankrupt by Nov. 2.

Lavy talked with reporters outside the Senate Agriculture Committee hearing room, which was so jammed that Senate staff wired a TV in the statehouse hallway for those who could not get into the room.

In 2010, Missouri voters approved an initiative that would require stricter regulations on dog breeders in the state. Supporters of the initiative say the restrictions would decrease animal abuse and neglect and improve the quality of lives for dogs and puppies.

Lavy said the 26 pages of new regulations are too expensive and out of touch with animal breeding. He said the new regulations called for by Proposition B will "kill animals" and drive 3,000 people out of work.

"Whoever wrote [Proposition B] has never raised an animal," he said.

Several measures are before the committee, including suggestions to completely repeal the ballot proposal, amend the proposal and remove the limit on the number of breeding dogs a facility can have.

Lavy acknowledged the chances of a full repeal were slim, but said he will continue to fight the law and change the worst parts of it to keep his kennel.

The sponsor of bill to completely repeal the measure, Sen. Mike Parson, R-Bolivar, said the wording of the voter-passed law is so vague that it could be extended to cows, horses, sheep and all other livestock that are crucial to Missouri's trade and economy.

Although Proposition B was described as a bill dealing with dog breeders, it includes a definition of a "pet" that covers any "domesticated animal normally maintained in or near the household of the owner."

Karen Strange, president and co-founder of Missouri's Federation of Animal Owners, appeared as a witness to support the repeal of Proposition B and spoke on behalf of the agriculture community. Strange expressed concern over the definition of livestock and the threat Proposition B poses to farmers.

"Our people are the working farmers of the state of Missouri who have put their heart and souls into their farms," said Strange.

While critics charge that the proposition could open the door to regulation of animals other than dogs, the president of the Humane Society of Missouri, Kathy Warnick, disagreed.

"Proposition B applies to dogs and puppies. There is no other reference to any other species," she said.

Warnick said that the primary goal of Proposition B is to upgrade the lives of dogs.

Proposition B passed with 51.6 percent of the vote in Missouri, with a majority of those votes coming from the Kansas City and St. Louis areas.