The Republicans, Lt. Gov. Peter Kinder, Senate President Pro Tem Rob Mayer, and House Speaker Steve Tilley, sent the request in a letter to Koster. They have repeatedly asked the attorney general to join a lawsuit against federal health care.

A U.S. District Court judge in Florida found the law unconstitutional, and 27 states have sued the federal government. In August, 71 percent of Missourians who voted in the state's primary election opposed the health care law.

The State Transportation Department estimates a $5.5 million cost for clearing roads after the historic winter storm. 02/03/2011

As Missourians shovel out from under this week's massive snowfall, the state Transportation Department has a big bill to pay.

MoDOT spent $5.5 millon, said a spokesman, Jorma Duran. That estimate includes the more than 40,000 hours of overtime labor and the 20,000 tons of salt used during the storm, he said.

Duran said the amount of salt used during the historic storm only accounts for 10 percent of the department's annual salt supply.

"There's never going to be a time where MoDOT says, 'We've got to stop our winter operations because of money,'" he said. "We want to make sure that the motorists are safe out there. So, if it costs however much it costs it's what it is."

Missouri's Transportation Department, concerned about livestock feed supplies running low after the blizzard, is allowing farmers to apply for an emergency permit to transport heavier loads of agricultural supplies.

The permits legalize loads that are 10 percent heavier than normal, MoDOT said in a news release. They're free and are set to expire at 12 p.m. Sunday.

But they might not be what farmers need, said Albert Kennett, an MU Extension livestock specialist. He said the biggest problem is not that feed supplies are running low, but farmers are struggling to clear paths through the snow to get the supplies they do have to their animals.

"The feeding is just really horrible. Just as difficult as it has been to get our cars out, it is that difficult to get feed to livestock," says Kennett.

Sandra Rankin from Rankin Farms said her farm is lucky to have equipment to clear enough snow to get to the cattle. But it's hard to get water to their animals because ponds have frozen over, she said.

"That's just the best you can do is see that they have feed and water. In this type of weather, it's an all day job and sometimes part of the night," Rankin said.

The snow wasn't as deep, fewer people than expected needed help, and conditions were less severe than the Missouri National Guard expected, but it still can't deactivate its soldiers.

"I expect them to be released within the next few days, but local officials can be the only ones to call them off duty," National Guard spokeswoman Tammy Spicer said.

"Columbia and Boone County was fortunate to not need anything, but Olson made sure this region did not need any resources or additional help," Schwartze said.

Although the National Guard prepared for worse, they still have people to serve.

"The National Guard has many missions and they cannot be released until those missions are complete," Spicer said.

As Missourians wake up Wednesday morning to a foot or more of snow, their elected representatives will rise from more temporary lodging -- their state Capitol offices.

Dozens of lawmakers and staff played poker and chatted in offices late Tuesday night, stranded by blizzard-like conditions outside.

Capitol Police said about 120 people slept in the Capitol overnight, many with cars that couldn't even make it to rented apartments or hotels elsewhere in Jefferson City.

"There's no choice right now. You can't move," said Sen. Tim Green, D-St. Louis County. "I have a Chrysler and my car can't go anywhere, so I'm sleeping in my office tonight."

Green and others planned to sleep on their office couches or on the floor with thin, gray blankets that emergency crews had dropped off earlier in the night.

"Typically we can make it out and back to our apartments or whatever, but this is definitely a first for me," said Rep. Ryan Silvey, R-Jackson County. "I certainly have not seen this many people stuck in the building."

Silvey was one of several lawmakers playing poker in the House lounge. He joined other Republicans and Democrats for a game that lasted until after 11 p.m. Others clustered in small groups. One person played the piano, while doors remained open and lights on well into the night.

Lawmakers said they were looking forward to Wednesday, when plows could clear the roads and they could drive back to their homes.

"In my 22 years here I've never been forced to spend a night in the Capitol, unless there was a filibuster going on during the legislative process," said Green, one of the longest-serving members in either chamber. "This is the first time in my 22-year career that I cannot leave the building."

MoDOT has reopened Interstate 70 but advised limited travel on the highway after closing it during whiteout conditions Tuesday. Meanwhile, the department has continued the complete shutdown of Interstate 44 from Springfield into Oklahoma.

Interstate 70 was closed around 4 p.m. Tuesday between St. Louis and Kansas City, as blizzard conditions blanketed much of Missouri. The decision to reopen it to traffic came at 7 a.m. Wednesday. Still, MoDOT urged caution while driving on the highway because it's still snow-packed.

“We’re in a state of emergency, and people need to act accordingly,” MoDOT Director of System Management Don Hillis said in a statement. “This is a storm unlike anything we’ve seen in a long time, and it will take us some time to get things cleaned up."

MoDOT did not say when I-44 would reopen. 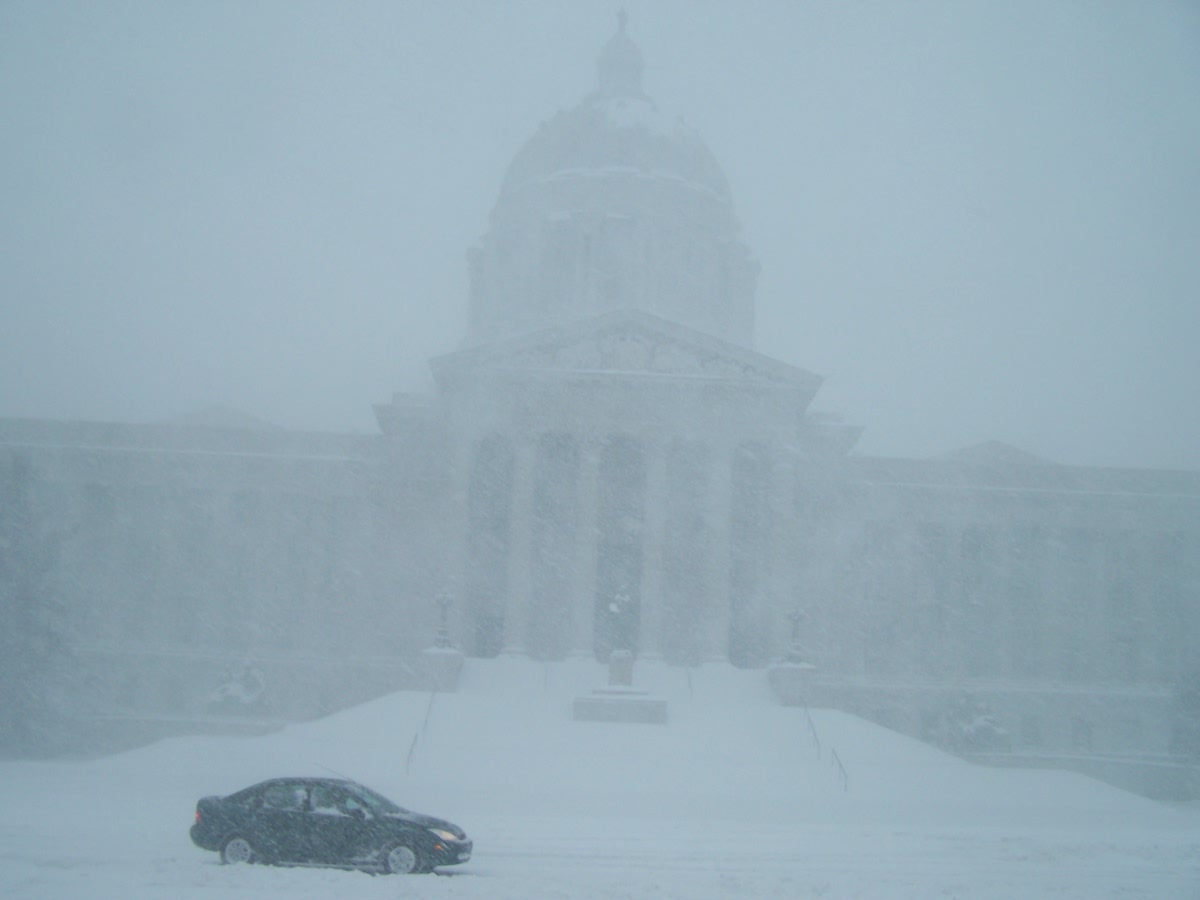 Missouri's House and Senate ended chamber action for the week before noon Tuesday as blizzard conditions enveloped the Capitol building.

The day before, legislative leaders had decided to continue with the full week of the legislature's schedule because many lawmakers already have arrived in town.

That approach was abandoned, however, after heavy snow began to fall early Tuesday morning followed by increasing winds. The legislative leadership decision left some members wondering how they would get home.

The executive branch, however, maintained it's decision to not officially close state offices. The Office of Administration Commissioner, Kelvin Simmons, issued a statement on the agency's website that urged state employees to "exercise good judgment as it relates to travel to and from work."

The page, however, included a link to an administration policy that requires an employee to get a supervisor's approval to not show up for work and cites loss of vacation time or pay as possible consequences for not showing up for work.

Despite the penalty, state government parking lots around the Capitol building were nearly empty Tuesday.

As blizzard conditions developed outside the statehouse, Missouri's Senate gave first-round approval to a measure that would expand the current ban on texting while driving to adults.

A few years ago, the legislature approved a ban on messaging while driving, but limited it to younger drivers.

Although the measure won easy voice-vote approval, Rep. Brian Nieves, R-Washington, questioned singling out a specific activity among the variety of things a driver can do that causes distraction.

"We just have this insatiable desire to think up another law and another way we that we're going to specifically mandate or control the behavior of people," Nieves said during the Senate debate.

The measure faces one more vote in the Senate before going to the House.

The Missouri Department of Transportation braces for what it calls a "historic" snow storm amid concerns the extreme weather will shut down the state.

The National Weather Service projects the storm will bring 12-18 inches of snow to Missouri by nightfall Tuesday. The state's transportation department is urging people to limit travel as much as possible during the next few days.

"If you don't need to be out there then stay home," Jorma Duran, a spokesman for the department, said.

Duran said among the department's biggest concerns are the expected ice accumulations. The National Weather Service projects that around a quarter inch of ice will accumulate by early Tuesday morning. Duran said that crews are, "laying down salt on curves and intersections as we speak."

Salt supplies still look good for the cities where the National Guard will be dispatched:

While most Missourians seek shelter from the winter storm heading toward the state, cattle farmers race into blizzard conditions to bring food and clean water to their livestock.

Former cattle farmer Sen. Bill Stouffer, R-Napton, raised concerns regarding the welfare of the cattle in the face of the winter storm. He said one of the worst in memory was a 1970s snowstorm that kept farmers away from their cattle for more than three days before they were able to bulldoze through the snowdrifts to reach them.

The executive vice president of the Missouri Cattlemen's Association, Jeff Windett, said a herd of cattle can withstand the cold temperatures, but problems are linked instead to the moisture they will have to endure. According to Windett, the presence of moisture requires significantly more feed be provided to the cattle in their pastures, and the drifts that are likely to be produced by the high winds will obstruct the paths farmers need to get to their herds.

However, Windett said he is confident cattle will come out of the snowstorm no worse for the wear.

The National Guard has been called in to help with the blizzard that is expected to hit the state early this week.

Gov. Jay Nixon called Missouri's National Guard into duty on Monday afternoon as freezing rain fell in the state capital, the beginnings of a winter weather storm predicted to culminate in 12 to 20 inches of snow for central and northern areas of the state.

Six hundred members of the National Guard have been dispatched into three sections across the state, focusing around Springfield, St. Louis and Kansas City. The guard members are to provide secondary assistance to local authorities and state departments as needed, doing anything from rescues, clearing the road for missions or going door-to-door giving assistance.

"Very rarely do we get a blizzard warning, so we want to manage this crisis, not have it manage us," said Major General Stephen Danner.

Freshman Rep. Wanda Brown, R-Lincoln, was hospitalized after she got in a car accident in Camden County Monday morning.

Brown's legislative assistant said Brown was taken the MU hospital in Columbia with injuries to her neck and back. He said she is in pain, but has full feeling and is not paralyzed in any way.

"From what I understand, she's in good spirits and talking and joking," he said.

It is still unclear how long Brown will stay in the hospital.

The University of Missouri's Columbia campus will be closed from 4 p.m. Monday through Tuesday night because of the expected "historic weather event," MU Chancellor Brady Deaton said in an e-mailed statement.

University of Missouri Health Care hospitals will remain open, and employees considered "situationally critical" will report to work. There will be no street parking on the MU campus, and city buses will not run in Columbia on Tuesday.

MU will notify students and employees by 4 p.m. Tuesday whether the closure will be extended, the university said in the statement.

This is the first time since December 2006 that MU has closed the Columbia campus and canceled classes. More than a foot of snow fell during that event, similar to the projections for this week's storm.