JEFFERSON CITY - In a typical kindergarten classroom, you might hear children practicing their letters, numbers or even naming colors. At one school not far from Forest Park in St. Louis, kindergarteners are learning these things in Spanish.

Jose Manuel Castro Chavez sits in front of his kindergarten class. The students sit close together on the carpet with dry erase boards in their hands.

"Dos," they shout in excited reply.

Almost every aspect of these students' school day is in Spanish. Only one flight of stairs away, another class is doing the same thing in French. Everything from classwork to art class is in a foreign language to completely immerse children in a bilingual environment.

Interest in charter schools has gone up in recent years because of the poor quality of public schools in the Kansas City and St. Louis areas.

A charter school operates with a sponsor, often a university or board of directors, that keeps the institution accountable and serves essentially the same function as a school board. The difference is that this board of directors decides whether a school stays open if performance is low, not the state. The school is subject to the same state testing guidelines as any other public school, but it is given the freedom to create its own curriculum or incorporate innovative teaching methods such as language immersion.

As a type of public school, charter schools cannot limit who can attend, but they do limit how many students can enroll. Charter schools are required to give all students an equal opportunity to enroll, regardless of location or demographics. Both the St. Louis Language Immersion School and Academie Lafayette use a lottery system to choose first-year students. The only preference is for siblings of current students or children of teachers at the school.

Language immersion is a specific kind of charter school. St. Louis Language Immersion School and Academie Lafayette are the only two public schools in the state offering this type of education.  There are a couple of private language immerison schools.

As a public school, they receive funding from state and local taxes but not at the same level as traditional districts. Academie Lafayette, for example, receives $400,000 less per year than traditional public schools and receives less per student. The teaching and learning director for the Missouri chapter of the National Education Association, Ann Jarrett, said this is because they enroll fewer special needs students.

One of the concerns with charter schools is the lack of transparency in their finances, Jarrett said. The schools recieve public funds but aren't held to the same standards of disclosure as traditional public schools. Charter schools are required to be registered as a nonprofit organization and often solicit donations to help pay for the school. Charter schools also recieve private donations and grant funding.

Another concern is that only 80 percent of charter school teachers are required to be state certified, according to the Missouri National Education Association website.

"And that's a quality issue," Jarrett said. "As (U.S. Secretary of Education) Arne Duncan is fond of saying, a third-grader only gets one chance at third grade."

St. Louis Language Immersion School was founded in 1999 by a board of directors in conjunction with the University of Missouri-St. Louis, the official sponsor. There are currently 530 students enrolled in the Spanish and French schools. According to a 2010 report from the Missouri Department of Education, the school employs 20 certified teachers.

The philosophy supporting language immersion is that students of language become fluent faster and more comprehensively at a young age than their high school counterparts. Their brains begin to imitate everything they see, so immersion in a language environment means that they are able to put languages in context and begin using them immediately, the school's founder Rhonda Broussard said.

"If you took a language in high school, by the end of kindergarten they will know more than you," Broussard said.

The curriculum at the St. Louis school holds students to a high standard, something Broussard said was non-negotiable in her decision to start a charter school. Based on her teaching experiences, she said she could never support an educational environment that did not push students to achieve.

"As soon as the standard changes and the expectation changes then you have to rise to meet that expectation," Broussard said of her teaching experience.

It is an adjustment for children to begin language immersion school; students are learning the basic concepts of language as well as both English and Spanish vocabulary and usually adjusting to full-time school. The first two days of each year, Broussard said, are almost completely silent.

"To see students go through this ripple effect of understanding what language means and then being able to master that on an oral and on a written level is just absolutely amazing to me," Broussard said. "To see kindergarteners who come in like that, they don't understand that there are multiple languages in the world, period. They come back in first grade in the Spanish school, and I can no longer have an intelligent conversation with them in Spanish because they have more Spanish vocabulary than I do."

The opportunity to become bilingual is not limited to those with a language background, she said. Ninety percent of students at St. Louis Language Immersion School come from an primarily English-speaking family and represent 44 different zip codes in the St. Louis area.

Because students come from different backgrounds and areas of St. Louis, Broussard said the diversity in the student body provides an advantage over traditional public schools.

"Having a school that really does replicate the diversity of the world that they live in is gonna be a helpful social tool for them over time," Broussard said.

The St. Louis Language Immersion School follows curriculum guidelines suggested by an international organization of educators founded in Geneva in 1968. This International Baccalaureate curriculum promotes an education based on understanding and respect for different cultures.

"This academic program is something that will give my children a benefit over their peers," Broussard said. "They see their children becoming citizens of the world."

An example of the International Baccalaureate program is the approach to standard topics such as history. While traditional public school students are memorizing the date of the Gettysburg Address and when states joined the union, International Baccalaureate students take "History of the Americas," a course that includes the perspective of countries such as Canada and those in the Caribbean.

In Kansas City, language immersion education has been around for quite some time. Academie Lafayette, founded in 1999,* is a French school teaching kindergarten through eighth grade. When Kansas City district schools for advanced language students started shutting down, parents wanted a charter school to provide an alternative, said the school's communications director, Katie Hendrickson.

Slightly larger than its counterpart in St. Louis, Academie Lafayette has 715 students and 57 certified staff members, according to a Missouri Department of Education report. Their teachers are from France, Senegal, Luxembourg and other French-speaking countries. They stick to the recommended state curriculum, Hendrickson said, occasionally mixing it up with cultural subject matter.

"We have to follow the Missouri curriculum just as every other public school does," Hendrickson said. "Really the only difference is we do it in French."

Many students will attend Lincoln College Preparatory Academy, part of Kansas City Public Schools.* There isn't much information available on student test scores once they leave Academie Lafayette, but former students have been recognized for their advanced French skills.

During their sixth-grade year, students travel to France and practice French with a host family. Academie students take a college French placement test in sixth grade and often test into the third level of college French. Joshua O'Dell, in seventh grade, said he loves going to French school and will keep speaking French when he leaves.

"French unlocks so many new doors," O'Dell said. "It unlocks Spanish and Italian, and after the second language you can just learn more and more and more." 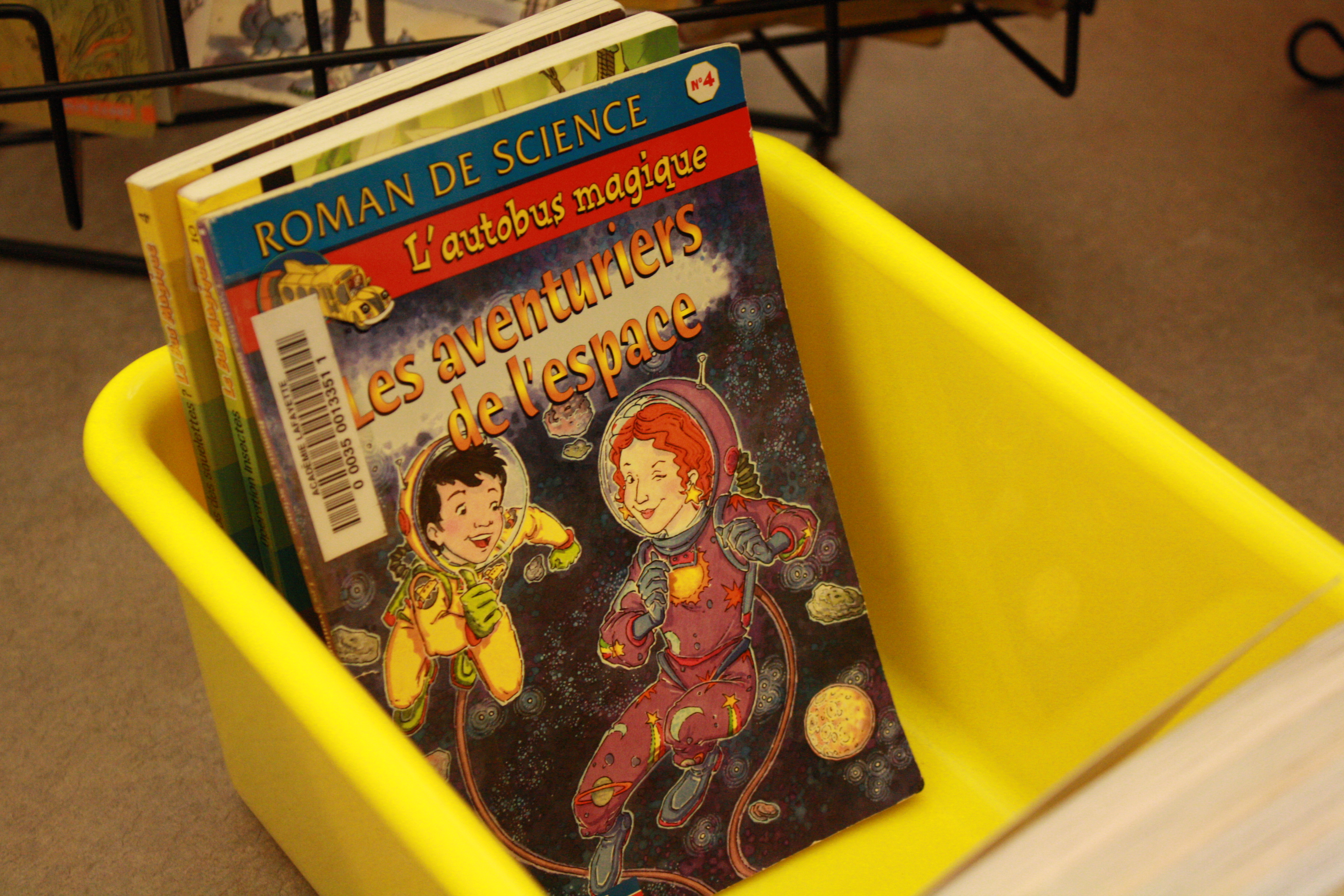 At Academie Lafayette they have childhood classics like Scooby Doo and the Magic School Bus in the French library.