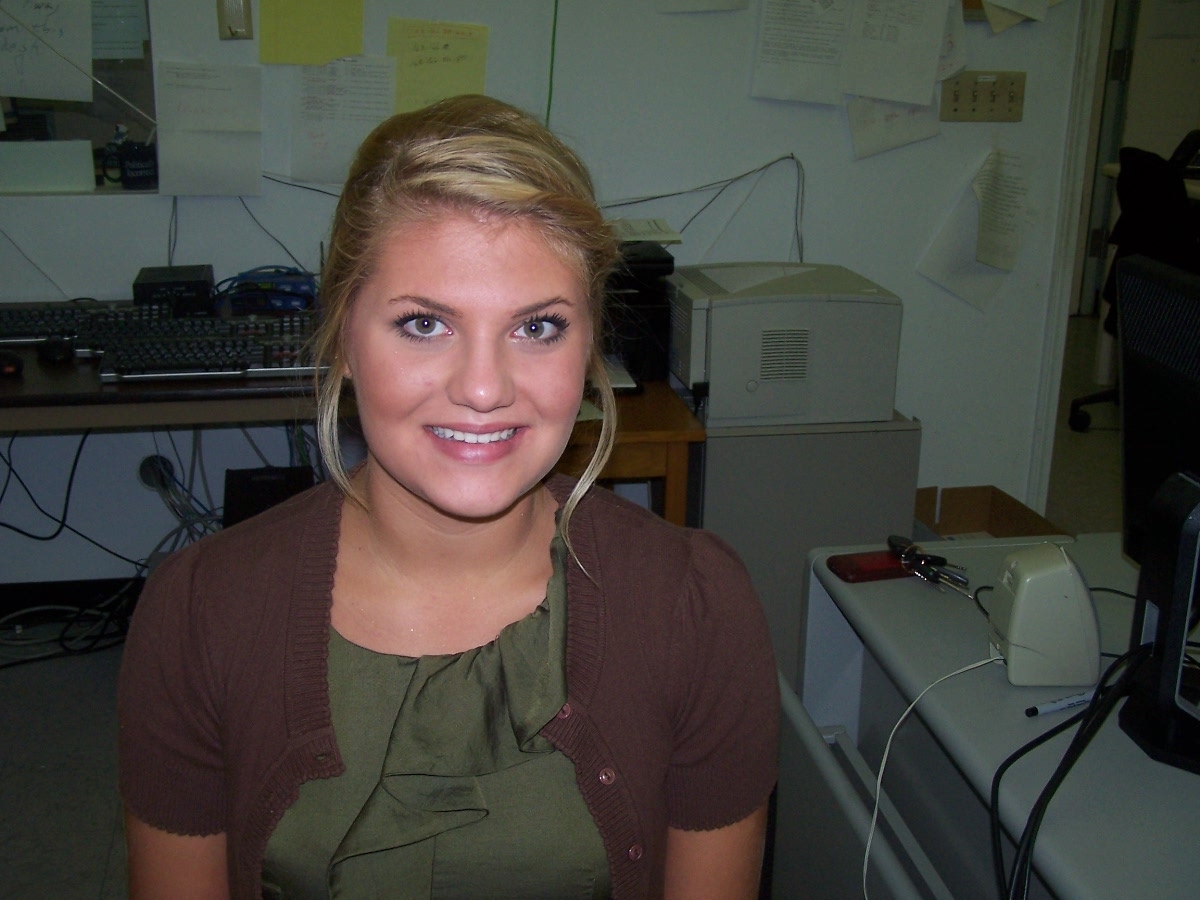 Watch me report via Skype on KOMU TV-8 U_News Tuesdays at 4:00

Ashley Massow is a junior studying Broadcast Journalism and Business Marketing at the University of Missouri. She grew up in the northwest Chicago suburbs watching Chicago's national and local news stations.

This is Ashley's first semester with Missouri Digital News, and first experience with radio broadcasting. She hopes to intern in Chicago or New York this summer.

Ashley will be reporting live  from the Missouri State Capitol building for KOMU TV-8 via Skype at 4 p.m. on Tuesdays this semester.

Ashley is involved on campus with S.T.R.I.P.E.S., Triathlon club, and Waterski and Wakeboard team. She also enjoys running and ran her first half marathon in Champaign this past April.

She hopes to pursue a career as a TV reporter and morning anchor in the future.

Stories by Ashley Massow in 2011 include:
Ashley Massow's Blog in 2011
Everyone's got a laundry list - what's the story?

Posted 11/05/2011:  This week I covered a new proposal by Rep. Shane Schoeller that hes calling the "Missouri Fair Elections Act."

The Bill includes several things - a laundry list of ideas.

1. Required Photo I.D.s at polling places (old news that will show up on the next election ballot)

3. Creating a new committee for redistricting so the indecision among currently even Democrat and Republican committees doesn't always leave redistricting in the hands of appellate courts.

4. Changing the margin by which lawmakers can override ballot votes from majority to margin voters pass the incentive plus one.

This is a laundry list of a story - and I struggled with finding the new news element and not just reporting this laundry list.

Find something ironic - or how it may affect recent decisions... could these new ideas he proposed be a result of something recently?

Don't make news out of a laundry list, but find the news within it.

Special Session Dies, E. coli Lives
Posted 10/28/2011:  On Tuesday the Special Session officially died, and all it took was two senators. It was really strange to see only 2 senators making such a big, but inevitable decision. Finally though, the game of hot potato is over and Lawmakers can focus on the regular session in January.

Thursday was another surprise - The House immediately adjourned as a result of the Senate's actions on Tuesday.

Phill picked up a news release off the fax machine that changed the day entirely.

Our news room went into "go" mode to get the story on what the St. Louis Post Dispatch was calling an antibiotic resistant E. coli virus in St. Louis.

It was interesting to see the news room in such a breaking news state - something that I hadn't seen before. Our reporters were all on the story, all on the phone, and all covering the E. coli from a different angle.

It gave me a lesson in how to act in a breaking news situation. That is - get the news and get what you know published as soon as possible.

The Rating Competition is Your Journalistic Friend
Posted 10/21/2011:  As a journalism student, I wasn't really sure of the relationship between competing journalists, stations, news outlets, papers, radio stations, etc. But more than not I have noticed that your ratings enemy is your journalistic friend. The journalists in the State Capitol have been nothing but helpful towards my seven peers and I during our time thus far at the state Capitol.

Why do I say this you ask?

Allie Blood, MissouriNet House Reporter and Missouri Digital News 'graduate',  played a more than helpful role in the MDN newsroom Thursday morning. She came in early and asked what we were all working on. She made sure we had our reporters on the right stories as Thursday was a big day in the Capitol. She is more than 'on top of her game'. I envy her confidence as a journalist and political reporter because it's something we could all use a dose of in the MDN newsroom. She was helpful throughout the whole day and I think we all appreciated her insight.

Rudi Keller, Columbia Daily Tribune Writer, has also been helpful in the MDN newsroom. He has not helped me personally, but I know he has been a resourceful person for one of our reporters Tong Gao covering Mamtek.

Not only the literal help has been great but reading other statehouse reporter' articles has been helpful.

Bob Priddy wrote a piece that helped me have an idea of what this unsuccessful special session means. He wrote that sometimes, failure can be a good thing.

Overwhelmingly so I have been impressed by the other statehouse journalists to mentor the MDN students and willingly answer any question we have. I hope they know that we appreciate it, and it is helping us to learn a great deal.

He had many constructive criticisms including:

My 'Beat' Goes On
Posted 09/29/2011:  On Tuesday I continued coverage of the Kansas City School District losing accreditation from a new angle.

Something Phill, Jenner and I had discussed a week and a half ago when the accreditation was officially dropped is how big of a problem Missouri's inner city school districts are becoming. St. Louis City, Riverview Gardens, and now Kansas City are all unaccredited school districts. So our question was, what are 4-year universities doing with unaccredited graduates?

So the conclusion is that some public universities are waiving this requirement temporarily. And as much as legislators, government officials, and the board of education don't think that it will ever get to the point where Missouri high school graduates can't get into their state universities, my understanding is that it is very possible. As I previously stated the Director of the Council on Public Higher Education says if high schools do not work diligently with the state to improve school district ratings, universities won't keep waiving the admissions requirement of graduation from an accredited high school.

THIS IS BIG NEWS.

But people like Scott Holste are making me feel silly for suggesting that universities would ever decline to accept Missouri high school graduates - which I see as neglecting the "big news" and a big Missouri problem. Holste said that I was misunderstanding the label of unaccredited rating - that the school district was unaccredited and not the students. He also said that receiving an unaccredited rating was actually a good thing because this meant that the state would have an intense intervention with the Kansas City School District.

This might be true in the long term, but what about the kids who are graduating in 2012? Who won't receive benefits of the intervention, but can't say they graduated from an accredited high school either?

There are so many spin off stories of this issue that I can and will continue to cover it until I can draw more attention to such a huge issue that is getting brushed aside.

Continuing the Catologue of Constructive Concepts
Posted 09/21/2011:  I have decided that the best way to document the things I learn is in the style I used for last week's blog. From now on my blogs will just be a short reflection and a list of bullet points on the things I take away from the Missouri Digital News newsroom each day. The bullet points will be the core of the content - the part you will want to read.

This is for my sake, the readers sake, and Phill's sake. When I look back at my blogs I want to be able to quickly recall the lessons I have learned. I think this style is the most efficient way to document the tidbits of information I gather that will ultimately be proof that I have progressed as a reporter.

On Tuesday I covered the Missouri State Board of Education meeting . During the meeting the board decided to drop accreditation from the Kansas City School district. This now means there are 3 unaccredited schools located in Missouri's two largest metropolitan cities. To say the least, I don't think this story is getting enough coverage... so I want to continue covering it and the results of this major change through enterprise stories.

Today Jenner and I began working on a spin-off enterprise story about what the 4-year college admissions offices will be doing/have done with students from unaccredited high schools. According the the Kansas City School District's PR buff, all will be well and all the students will still be able to get into 4-year colleges. Although this may be true, will a student who has a ACT score of 36, GPA of 4.0, and is an extremely involved student at an unaccredited school still have an opportunity to attend Harvard? Is Harvard accepting students from unaccredited high schools. My assumption stands boldly at no but let's not assume things - let's make a story of this.

So far today we have called almost every university within Missouri state lines and we also contacted Illinois State University and Kansas University for a perspective from other states regarding theses students.

But I think the story lies within state lines. Are the same tax payer dollars which left a high school student stranded at an unaccredited high school going to deny a student of a state college education? This is ultimately a HUGE deal because Kansas City and St. Louis are such large economic centers in Missouri, and unaccredited schools serving these areas is surely something to report on... especially if state colleges aren't letting their students in. But I don't know any results yet because everyone in the admissions offices is conveniently on vacation today.

This is my first blog, so I will reflect on the experience I have had with Missouri Digital News as a whole thus far.

The oppourtunity to work for Missouri Digital News with Phill Brooks is unarguably a great one. This is not the only thing I have learned in my short time working with Phill.

Here is a list of the things I have learned thus far: