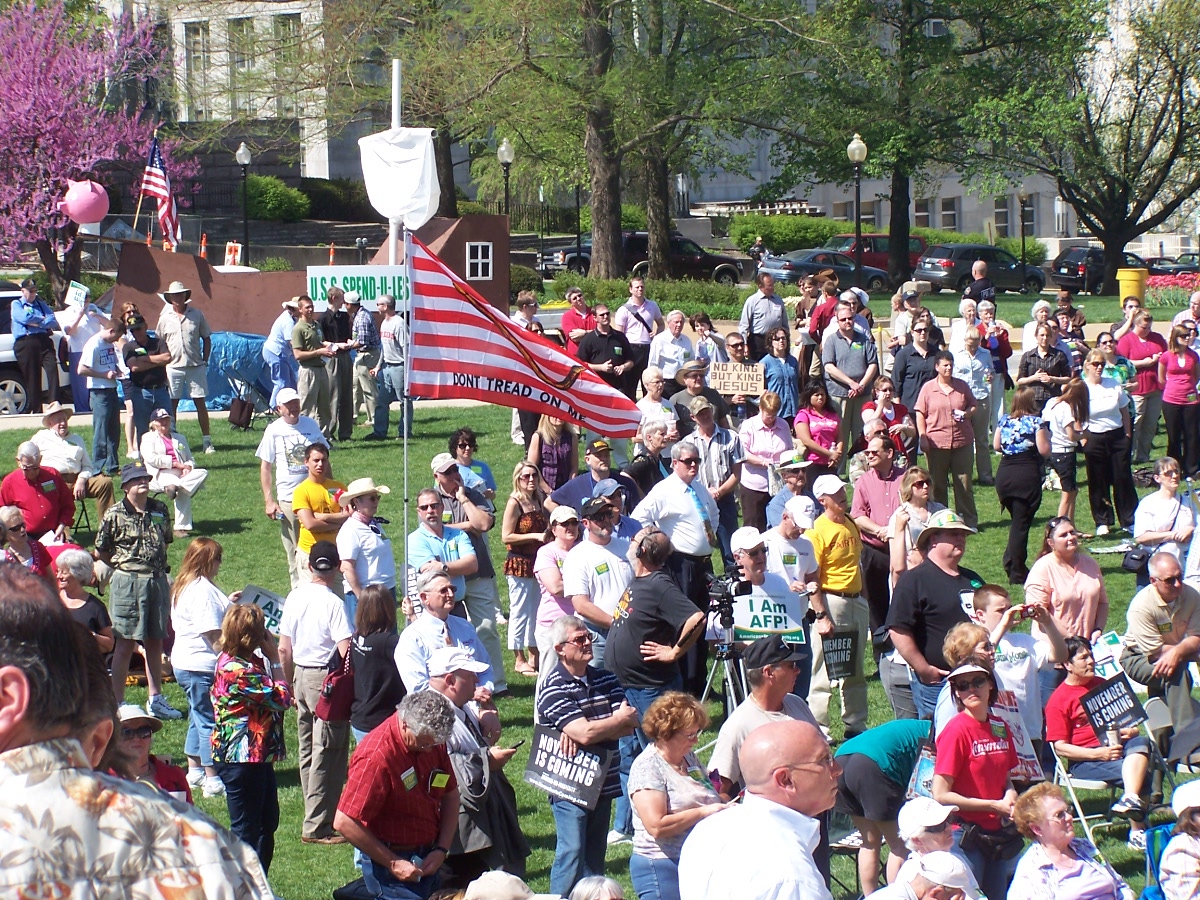 The event, hosted by Americans for Prosperity, was organized by Carl Bearden, the organization's Missouri state director. Bearden said he hoped the rally would prompt citizens to "engage and take action," whether it be at the event or into the future.

Reagan shared several anecdotes, including how, at age eight, he proposed an increase in his weekly $1 allowance. According to Reagan, his father delivered a 35 minute explanation of government taxation, ultimately prompting the younger Reagan to offer his father back half of his allowance. Rather than accept the fifty cents, the former president told him, "when there is a president elected who gives me a tax break, I will give you a higher allowance."

"People like to say this is a Republican movement. This is a people's movement."

But the Tea Party movement does not resonate with everyone. Lone protester and Capitol intern, Trevor Collins, 22, of Jefferson City, raised concerns about racial divisions with the group.

"Just look at the racial make up of this gathering... I'm the only person of color I saw here, and that's a damn shame," Collins said. "There are plenty of black and Latino people who are conservative, who believe in small government."

Collins also spoke out against media propaganda and racist iconography he said were associated with the Tea Party movement. Collins said some right wing media outlets were not being honest with citizens.

"They're tricking people," Collins said of the right-wing media outlets. "They're confusing them. Many [Tea Party supporters] weren't very politically cognizant or aware before the election of our first African American president."

Reagan addressed claims that the Tea Party movement provided an outlet for racist groups to infiltrate. According to Reagan, "this is not new."

"This is stuff that happens when you put groups together any time in the history of mankind," Reagan said. "So it's not something that I get all flustered about, cause I know it's gonna happen...Don't let that stuff get in the way of what you're trying to accomplish."

Melissa Shamp, 33, traveled from Kansas City to volunteer at the event. Wearing a green sticker that read "stop the spending," Shamp said she was "here to listen and learn."

"I care," Shamp said. "I care about the deterioration of our government. We're not a silent majority anymore, we're a vocal majority. These changes are being pushed upon us, and we don't want them."

Brunswick couple Shirley and Harry DeWeese brought their sons, Carl, 10, and John, 6, to the rally. Shirley said she hoped to impress the importance of government involvement upon her sons.

"When you believe something, you stand up and speak," Shirley said.

D Jayamanne, of Columbia, sat in the shade, watching the South Lawn crowd from across the parking lot. Carrying a sign that read "I am not your ATM," Jayamanne said his biggest concerns were government spending and tax increases.

"We need to protest this, they're spending too much of our money," Jayamanne said. "Taxes have gone up, and they are going to go up more. All they do is waste it."