While Nixon praised his administration's efforts in managing the state's budget shortfall, his address was followed by a blistering attack by Republican Lt. Gov. Peter Kinder. S 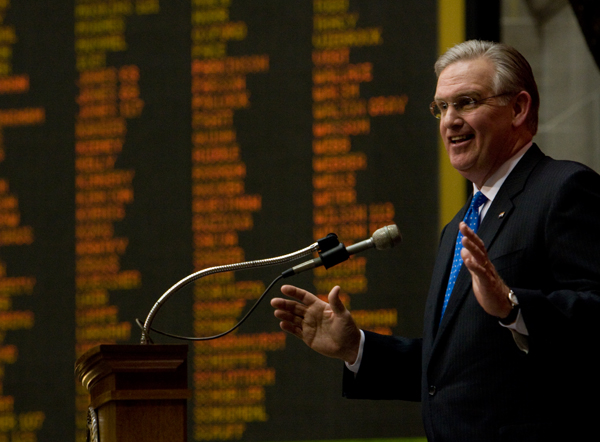 ome of the initiatives that Nixon focused on heavily, such as the curbing of pay-day loans and the cutting of business taxes to spur growth, were either dismissed or harshly criticized by Kinder and House Republican leaders.

"Last year, the governor refused to consult with us," Kinder said. "He borrowed money from the state's rainy-day fund, shuffled money in closed door meetings and 'cooked the books' with Wall Street-style accounting."

Kinder, who has served in his position since 2005 and is the only Republican statewide office holder, has delivered the Republican rebuttal to both of Nixon's State of the State speeches. Seizing on the growing national unpopularity with President Barack Obama's proposed policies, he devoted a large portion of the response to criticizing the health-care reform bills being debated in Washington and the federal stimulus plan.

While the Republicans took shots at Nixon, the governor's speech took full advantage of the theatrical power inherent with State of the State addresses. Speaking to an overflow crowd from the Dias of the House Speaker, Nixon brought in Missourians as visual assistance in promoting a diverse array of initiatives: there was the CEO who moved his company from San Diego because of lower taxes and the Ray family in St. Louis to promote a continued freeze in higher-education tuition. He said these initiatives would require bi-partisanship, especially because the Republicans control both the House and Senate.

"In everything we do this year, we must put our differences aside and put Missouri first," Nixon said. "Our most pressing economic challenges ... are too important to be sidetracked by partisan bickering."

Rep. Allen Icet, R-St. Louis County, who chairs the House Budget Committee, said last year's budget negotiations were dominated by the administration, and fellow Republicans also criticized Nixon for only issuing his 2010 budget prior right before the address was delivered, not giving the legislators a chance to look at it.

"If we had bipartisanship, it would make my life much easier," Icet said. "I would not characterize what happened last year as bipartisanship." While Sen. Frank Barnitz, D-Lake Spring, was unhappy with the Republican response, he was most upset with the accusation that Nixon's administration used misleading accounting techniques to balance the budget. He said the state's constitution has been amended in such a way that book-cooking could not occur and equated Kinder's speech to one that would be heard during a campaign, not as an official party response.

"I think the Republican response was that he (Nixon) had 'dismantled' the budget or broken the budget," Barnitz said. "You can't dismantle our budget because of previous things with the Constitution. I don't think anything they threw out there was anything other than a partisan way of trying to divide. I found it to be very combative."

Kinder accused Nixon's acceptance of stimulus funds as a reason why unemployment has risen in 2009 and used the salaries of Nixon's staff as a mechanism to portray the governor as out-of-touch with the financial problems of many Missourians. After asking for a cut in salaries for 2009, Nixon's administration asked for an increase this year. Nixon currently has five members of his staff making over $100,000 annually, compared with two in the final year of Blunt's one term in office.

State Budget Director Linda Luebbering said the salary increase was necessary given the increased burden Nixon's staff has in facing what she last year called the "worst economic conditions in our lifetimes." She said the problems facing Missouri was based on global factors and not an indication that Nixon's policies were detrimental.

After several requests, the governor's office was unavailable to comment on the accusations Wednesday night.