A Day in the Life of Dine
From Missouri Digital News: https://mdn.org

A Day in the Life of Dine 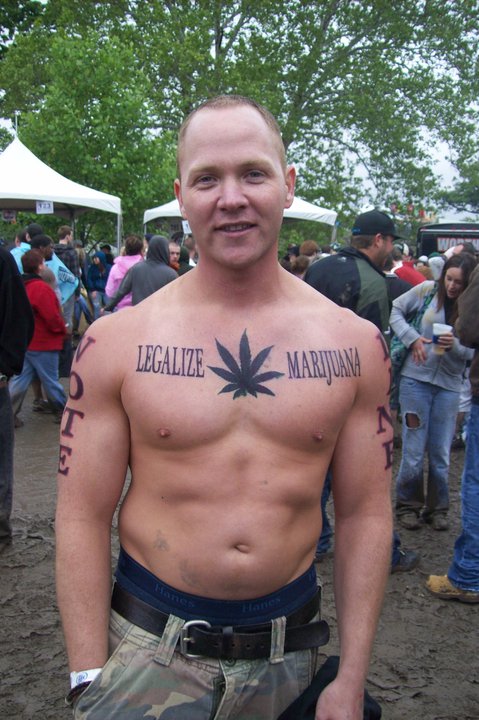 "I had a friend who is a tattoo artist give me a fake tattoo with my name...and 'Libertarian Party' across my back," said Jonathan Dine.

During the campaign, Dine also has sported a temporary tattoo, picturing a marijuana leaf and the words 'legalize it', across the front of his chest. He showed off this and his other fake tattoos at one of the many concerts at which he campaigned.

The Libertarian candidate has campaigned on a platform of pushing for more individual rights, like the legalization of marijuana and shorter term limits for elected officials. Dine said the issue of term limits is important to him because, he said, such regulation can limit corruption and protect individual freedoms.

A single parent and personal trainer with no prior political experience might not sound like a candidate for the U.S. Senate.

"I think that's what the people want and need," Dine said. "A new voice and someone the people can identify with, stepping away from the career politician."

Although Dine has no political experience, he said running for elected office has been on his mind for a while.

Dine works as a personal trainer at a fitness center.

Marc Lewis, Dine's boss and the owner of Snap Fitness in the Kansas City area, has worked with Dine for more than a year and said he has faith in Dine's campaign.

"That's one thing that I see in him, wanting to change or fix things that are broken in our political system," Lewis said.

Dine's opponent in the Libertarian primary, Cisse Spragins, agreed that Dine's campaign has been successful thanks to his use of new campaign techniques.

"He has done a very good job of reaching younger voters," Spragins said. "He primarily used social media for his campaigning and he is targeting younger voters. He is pretty young himself."

The two main contenders in the race for Missouri's open U.S. Senate seat, Secretary of State Robin Carnahan and U.S. Rep. Roy Blunt, have also used social media to connect to younger voters on a more personal level. Dine, in an effort to be even more interactive with voters, has even taken his campaign one step further -- besides using his body as a platform for temporary campaign tattoos.

According to Dine, Wakarusa and Rock Fest are a few of the concerts that he has attended around the state to get his name out there and spread awareness about the Libertarian party itself.

Dine cited his main competitors, Blunt and Carnahan, as examples of career politicians. The massive campaign contributions reported by each candidate, Dine said, shows how entrenched in politics Blunt and Carnahan have become.

While Blunt and Carnahan have raised millions of dollars in campaign contributions, Dine reports only about $1,000 from his contributors.

That money has been enough to make yard signs and campaign throughout the state, Dine said.