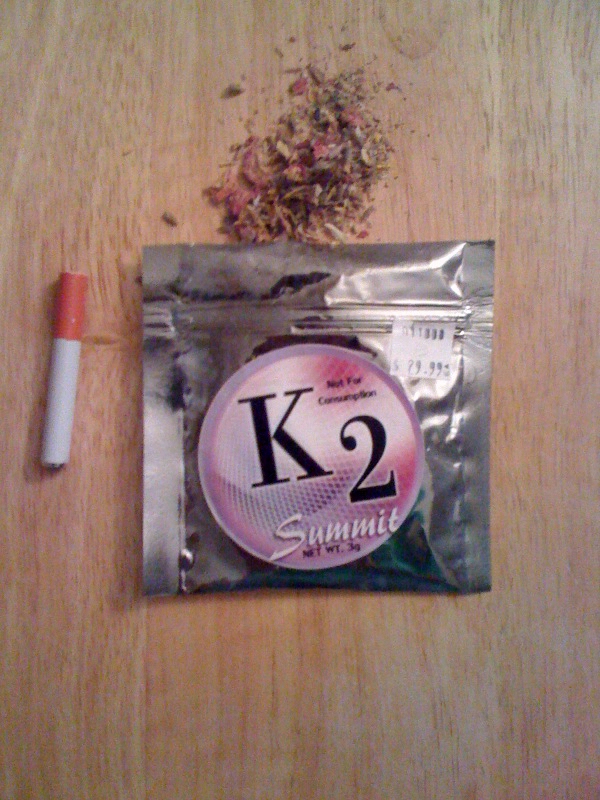 When I initially wrote that sentence, I was. My plan was to sample K2 - a substance that some legislators have said mimics the effects of marijuana - and write about the experience in real time.

Unfortunately, the high provided by the"fake pot" was quite real, restricting my movements to laying in an easy chair and watching television.

I first became aware of the pot substitute from an article in Thursday's St. Louis Post-Dispatch. On the same day, a bill to make K2 and similar products illegal - sponsored by Sen. Kurt Schaefer, D-Columbia - was read for the second time on the Senate floor.  Having never heard of such a thing, I was immediately curious and somewhat skeptical.

Before I go any further, I must admit I don't care for marijuana. My limited encounters with the drug have produced feelings of alienation and a strong desire for solitude and sleep. The issue of marijuana's legality is not the point of this piece, I'm just offering my own experiences.

That said, my curiosity for this new, legal substance outweighed my distaste for the drug's effects. How could a substance that mimics the effects of marijuana be available and how could I have never heard about it?

Around 2 p.m. Friday afternoon I decided to attempt to obtain herbal incense - the technical name for fake pot - and report on its effects.  I feel it necessary to note that this experiment was not suggested nor approved by an editor or any other individual connected to MU. I am quite capable of divining stupid ideas on my own.

At 3:30 p.m. I set out to obtain K2, or a similar substance. I live in a liberal, college town filled with dirty hippies, I thought, how hard could it be to find this currently legal pot substitute?

I began my search at the Peace Nook on Broadway, a name that to me suggested head shop. Unfortunately, the Peace Nook did not stock herbal incense, though the helpful clerk was nice enough to alert me to two Columbia businesses that did -- Dreams Smoke Shop and Bocomo Bay.

Dreams was my next stop, for the simple reason it was within walking distance of downtown. Arriving at Dreams, I identified myself as a reporter interested in information on K2 and was immediately met with strong resistance.

Yeah, I know what K2 is, but we don't have it right now, the clerk said.

"Do you know when you will have more," I asked.

"Nope, it just depends on when she comes," he said.

"So she, " (an odd term in reference to a business supplier) "doesn't deliver K2 on a specific day," I said.

"Nope, it depends on when she comes," the clerk responded.

I asked if the clerk knew where I might go to obtain K2 and his response was equally weird.

"I know some places, but I doubt they have any," he said. "I think the town is all out."

Somewhat defeated and confused by his answers, I called Bocomo Bay to check their supply. This call went much better. The person who answered the phone at Bocomo Bay informed me that they carried many varieties of herbal incense and had them in-stock.

Asked about the town currently being out of the substance, the employee informed me that not only did they have it, but they planned on carrying quite a robust stock.

Upon entering Bocomo Bay and asking for K2, the clerk asked if I had used the substance before. When I said no, the clerk informed me I should start with either pink or summit, and work my way up to using the other two varieties of K2.

I don't know how much marijuana costs, but three grams of K2 cost $30. As this experiment was not sanctioned, this was not a cost for which I would be reimbursed.

In what I initially assumed was a head shop up-sell, the clerk asked me if I had an incense burner.  I'm not going into debt any further for this story, I thought, especially since the alleged high came from smoking, not burning the K2.

"I already have a burner," I falsely informed the clerk in an attempt to end his sales pitch.

No, with this you need a really small burner, the clerk said while producing a box of thin metal pipes.

For those who have not been to a "smoke shop," there are a number of words customers are not to use. Referring to a bong as bong, for example, will result in immediate expulsion from the shop. The proper term is usually tobacco pipe.

With that in mind, however, I didn't see how this pipe could be classified as anything but device for ingesting smoke. The thin metal pipe - often called a "one-hitter" -  had a large opening at one end and a much smaller one at the other. It would be impossible to use the device to simply burn incense without drawing smoke in off the smaller end -- a practice the bag of K2 warns against.

I ended up purchasing the "burner" with the K2 as I did not have one. I'm also completely incompetent at rolling a joint.

Spending $36.56 on the K2 and pipe, I headed home assured that I had just wasted money. How could a substance that mimicked marijuana possibly be put on a debit card? He should have tried to sell me X-ray glasses as well.

Keeping in mind the clerks warning that I wanted to start slow, I filled the pipe twice and smoked it.  Not more than 10 minutes later, my skepticism had faded into a haze of warmth and lethargy.

Unable (or perhaps unwilling) to begin my writing assignment, I instead grabbed a notebook to record the effects of K2. They included:

I'm still amazed I was able to watch 45 minutes of Celebrity Rehab, a show I generally find distasteful. With the exception of a trip to the kitchen to make a quesadilla during a moment of hunger and a phone call from my wife, the majority of my high was spent watching Celebrity Rehab, Law and Order and a show I had never heard of, Criminal Minds. In retrospect, an embarrassingly stereotypical way to spend an afternoon.

The call with my wife, who seemed to find my experiment either amusing or annoying, produced another effect of the K2, the inability to remember words.  On multiple occasions during the conversation, I was unable to produce the word I was looking for, instead ending sentences with "Oh, you know what I mean."

My wife asked what K2 was, a question I was unable to answer.

K2 comes in a small silver package with a closure at the top one can press to keep the package closed. A sticker that reads "K2" is affixed to the front, also containing the type (summit) and a warning that the product is not for consumption.

No ingredient list adorns the back of the package, something the Post-Dispatch pointed out in their article. Also fascinating, the Post-Dispatch reported a supplier of K2 to some vendors in St. Louis refused to say where he obtains the product. Perhaps the mystery she the clerk at Dreams spoke of?

A mysterious woman selling an unspecified substance, a perfect character for a Fleetwood Mac song perhaps.

The fate of this woman and her gold dust is now in the hands Missouri's General Assembly, a decision I care to comment neither for or against.

The potency of the her gold dust, however, is most certainly not a mirage.