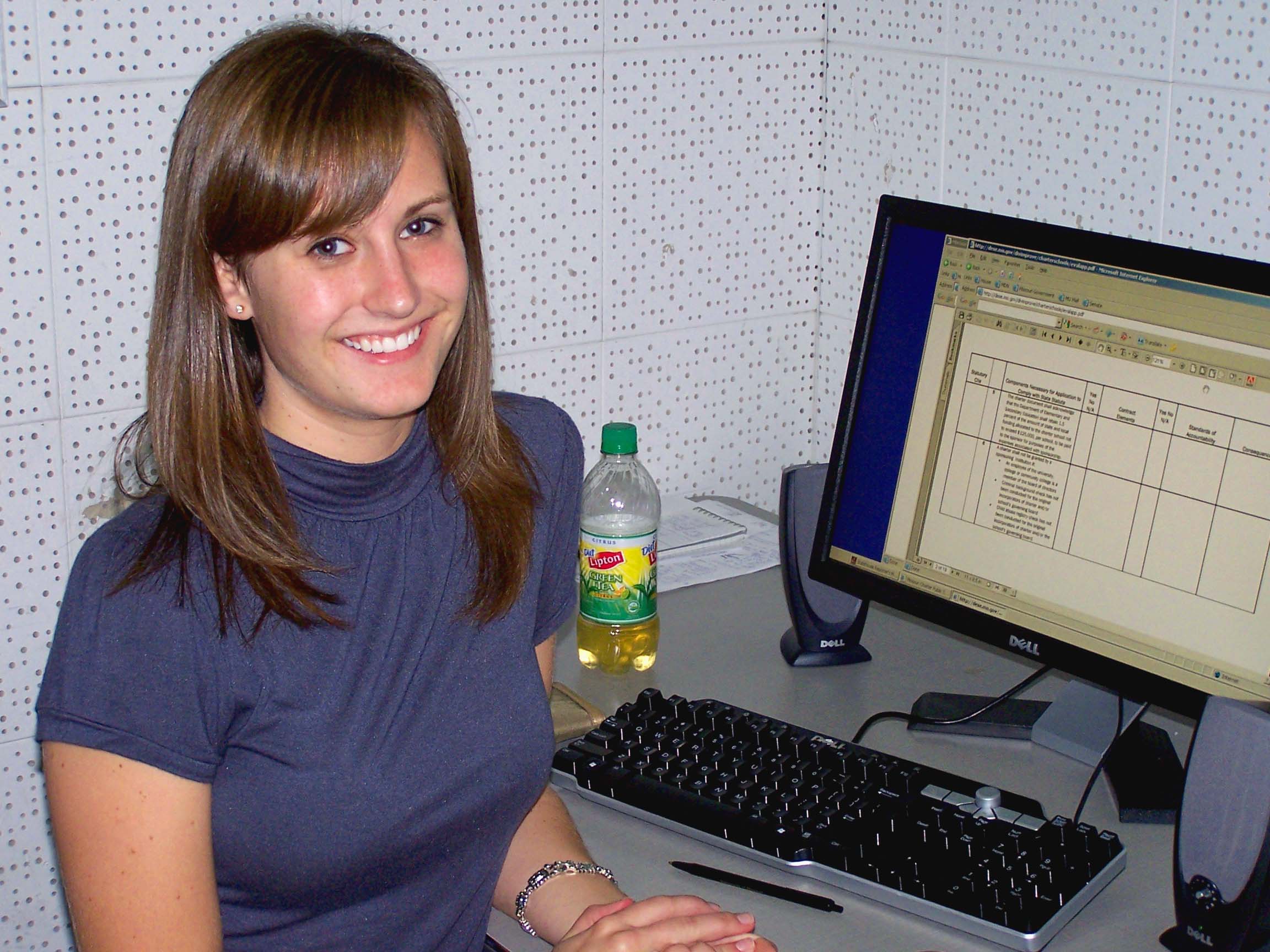 Stephanie Fleming is a magazine journalism and political science major at the University of Missouri.

It's my last day here at the Capitol and I must say, I'm going to miss all of Phill's great quotes of wisdom.

The really great ones we write down and post on the walls all around the office. Some of the best are:

While most of the situtations that inspired the comments from Phill are funnier than the actual phrase, each one actually has a lesson in it.

We've had some strange stories come out of the newsroom this year, but none quite so strange as the recent allegations against Rod Jetton.

He's been charged with assault, arrested and released on bail for hitting and choking a woman during intercourse.

The police report said he entered the woman's home on Nov. 15 with two bottles of wine. The woman said she didn't see him pour her glass and remembers fading in and out of consciousness throughout the evening.

She recalled being slapped in the face very hard and awoke once to him choking her. She also had bruises all over her body, which were later photographed by police.

The safe word the two had agreed upon was apparently "green balloons."

Most of us in the newsroom thought this was the most random "safe word." Upon some Wikipedia research, however, Becky informed us that apparently using the colors green, red and yellow in combination with an out-of-the-ordinary word. Generally, however, green means "go," so the fact it was used to mean "stop" seemed pretty unusual.

Then again, the whole thing was unusual.

Becky came up with a rather clever title, though: "Rod Jetton: Balloon Boy."

The 2009-2010 Blue Books are in! We spent part of the lunch hour looking at the Missouri Almanac section learning all sorts of fun facts.

For example, Missouri has a state dinosaur. I'm not entirely sure how common that is among our 50 states, but I found it pretty interesting. For the record, it's a hypsibema missouriense, or Hadrosaur. Apparently it's a duck-billed herbivore that contained as many as 1,000 teeth. It was first discovered, according to the Blue Book, near Glen Allen, Mo. in 1942.

The most exciting addition to the almanac, however is Missouri's state dessert: the ice cream cone. The cone made it's international debut at the 1904 World's Fair in St. Louis, Mo. and has since become an indisputable staple to ice cream lovers everywhere, I'm sure. Although I must say, the cone as the sole dessert wouldn't be near as enjoyable without the ice cream!

According to the almanac, Missouri is ranks tenth among the 50 states in ice cream production. I'd be interested to know where our fine state ranks in consumption!

Shakespeare
Posted 11/11/2009:  Hats off to Max Reiss who somehow managed to work a Shakespearean reference into a question yesterday.

While covering what was thought to be a hostage situation at the Governor Office Building in downtown Jefferson City, Max asked the captain of JCPD if the response of law enforcement officials was "much ado about nothing" as it became apparent there were not hostages.

While I'm pretty sure I was the only one who picked up on the reference to the title of one of Shakespeare's most popular comedies, it certainly lifted my mood in what had been an intense early afternoon.

I had hoped to hear a promised reference to the "Comedy of Errors" at the press conference, but alas, it never came.

Whether you meant to do it or not, Max, it made my day.

This week
Posted 10/30/2009:  This week was a little better than the past few in terms of spot news. There were two quick stories I was able to finish in no time on Tuesday and Thursday. It was nice to be able to turn around a story in one day again!

I wasn't able to do much work in the newsroom on my other feature piece though. I did a few phone interviews between classes but hope to get into some substantive material next week.

It was nice to cover some spot news this week given the slow weeks we've had recently. The Joint Committee on Education met to hear public testimonies about the open enrollment question. Witnesses ranged from current and former superintendents, state officials and parents.

Most of the testimonies seemed pretty split. Some thought funding would present a major problem. Others argued it was a matter of convenience.

I'll admit, I didn't really know many of the sides to the argument so it was very enlightening and definitely got me interested.

I haven't worked with anyone on a story in awhile either and had a fun time working with Christine!

The charter school piece is complete! I'm happy to finally have it finished.

I was able to compile great data provided from the Missouri Department of Elementary and Secondary Education which shows that Missouri charter schools consistently scored lower than state averages in almost every grade level and in every section of the exam.

Some schools have been performing at such low levels, they are not likely to remain open beyond the close of this academic year. Paideia and Ethel Hedgeman Lyle academies are two schools the DESE director of A+ and charter schools expects to close. Their test scores have actually worsened each year and she said they have been given many warnings about bringing up student performance levels.

Next week I'll finally get a chance to get in touch with the MDHE and DESE commissioners for profile pieces.

This week was slow in terms of spot news. I worked more on my charter school feature piece and should be able to file it next week.

I spent a lot of time pouring over 2009 MAP score statistics for all charter schools in Kansas City and St. Louis and compared them against state averages. The findings were pretty surprising. With the exception of 10th grade English 2 scores, no Kansas City charter schools averated over 35 percent of students testing into the "Proficient" or "Advanced" ranges in any part of the MAP test in 2009.

St. Louis charter school scores are even lower. With the exception of 7th grade communication arts and 10th grade English 2 scores, 20.09 percent and 28.9 percent respectively, no schools averaged over 20 percent of students testing into the "Proficient" or "Advanced" ranges in any part of the MAP test in 2009.

Next week I'll be putting in some calls to different charter schools, both that are excelling and some that are under-performing state averages.

The radio story I worked on a few weeks ago has really impacted my print writing. While I don't feel I struggle to be concise, I certainly think a lot harder about my leads. Previously, I would evaluate what I as a concerned citizen would want to know about the topic and what information was needed to provide context. I would make that the focus of my story and fill it in with quotes and context as necessary and relevant.

However, now I really need to sit down and think about how many different ways the story could go. As Phill said, there's more than one lead to every story. Even if it's not a lead, I have made a conscious effort to include any other possible leads or angles into the story as best as I can.

I came to the Capitol today ready to chase a great story idea.

The story centered around HR 3221, a bill currently going through the US Senate that would eliminate government subsidies to private lenders and make the US Department of Treasure the direct lender in student loans. I had a great interview with a MOHELA official on Tuesday that really piqued my interest in the matter.

The official told me that by moving from a private/public partnership to just public, both students and taxpayers would be disadvantaged. He also said it would contribute significantly to the federal debt. However, I found some contradicting data online.

Unfortunately, despite all my enthusiasm my phone calls went unanswered and unreturned. Hopefully next week I'll get to speak with some one about it!

Radio stories
Posted 09/17/2009:  Wednesday I covered the Joint Committee on Education meeting that hosted the new DESE commissioner, Dr. Chris Nicastro. Phill surprised me with the opportunity to do both a radio and print story. The print story was much easier to complete. As I am a print writer, I found it very challenging to write a 40 second story. When I write a story, I'm used to 350 words. Allie blew me away when she said I got five sentences. Although it was time consuming and a little frustrating, I'm glad for the chance to learn how to use the equipment. It offered me a chance to produce several different angles on the same story--an opportunity I don't have that often when writing a print story. I still enjoy print more, but I definitely feel I benefited from the radio experience.