NewsBook:  Missouri Government News for the Week of January 13, 2014

Before the committee were three bills that contained portions of the bill vetoed last year.

The arguments before the committee were the same.

Supporters said tax cuts for income tax payers and businesses would stimulate the economy and put Missouri in a more competitive position with bordering states that have cut taxes, such as Kansas.

"I think whether we like it or not, tax relief and these broad-based tax cuts are the new border war we are facing and Missouri must remain competitive," said Tracy King, a lobbyist for the Missouri Chamber of Commerce.

Opponents, however, argued the tax losses would not be recovered from economic growth and would lead to cuts in education and other government services.

Among the opponents was the former budget director for Republican Gov. John Ashcroft.

Jim Moody, now a lobbyist for a Kansas City organization of business leaders, told the committee that not all of businesses supported the tax cuts.

Moody disputed claims that economic growth had replaced the tax loses for government services from the tax cuts.

"They are not growing. They are contracting," Moody said.

The committee took no immediate action on the proposals. One of the bills would cut the income tax rate for higher incomes, another could cut business income taxes and a third would phase in reductions in both personal income and corporate income tax rates.

Legislative staff estimate the combined package, sponsored by the Ways and Means Committee chair, would lead to nearly $1 billion in reduced taxes when fully implemented.

That would exceed ten percent of Missouri's entire annual tax collections for the General Revenue budget.

However, the bill sponsored by Sen. Will Kraus, R-Jackson County, would not authorize an annual phase-in of a tax cut unless state tax collections had grown by at least $100 million higher than collections in any one of the prior three years.

Missouri's secretary of state proposes his own lobbyist restriction plan. 01/14/2014 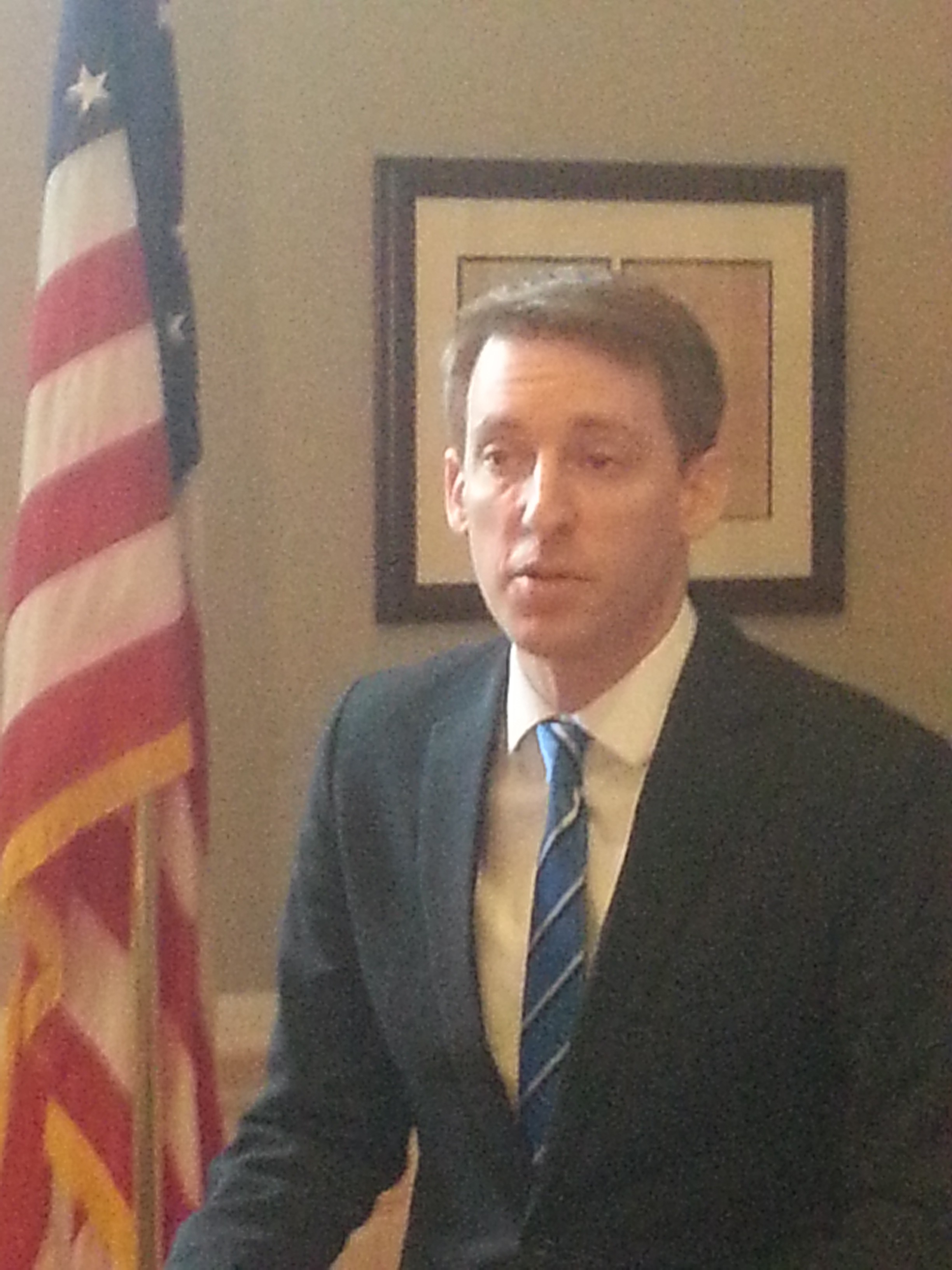 Under Kander's plan, a lobbyist would be prohibited from providing a gift or meal of any value to a legislator, public official or staffer. His bill also would make it a crime to lie to the state Ethics Commission and, like other Democratic proposals, would impose limits on how much any one person could contribute to a political campaign.

"It's time we really get serious about this," Kander said at a news conference in which he noted that similar restrictions have been proposed in the legislature but stalled for years. "All over the state Missourians are wondering whether or not their legislature is going to address this issue."

In December before the legislative session, Gov. Jay Nixon had joined with a Republican and Democratic legislator endorsing a similar package, but one that would allow a lobbyist to make an expenditure of up to $50 for a legislator.

The Senate sponsor, Sen. Will Kraus, R-Jackson County, said he could support a total ban on lobbyist gifts, but that it stood little chance in the legislature. Kraus also said there was practical consideration.

"To think someone is going to be bought off by a lunch is something else you have to look at," Kraus said in reference to the regular Capitol lunches and breakfasts that lobbyists provide during legislative sessions that are available to anyone -- including legislators, staff, fellow lobbyists and visitors to the statehouse.

On the House side, House Majority Leader John Diehl who co-sponsored a similar $50 exemption said he was willing to discuss tougher limits.

Ironically, less than an hour after Kander's news conference, the Missouri Cable Telecomunications Association hosted a buffet luncheon just outside the House and Senate chambers in which legislators and staffers partook.

Wealthy Missourians would pay higher income taxes to offset a cut in taxes for lower and middle-income taxpayers under a plan unveiled by House Democrats Monday.

For Missourians earning more $5,000 up to $30,000 in taxable income, tax rates would be cut to four percent. Currently, taxable incomes above $9,000 are taxed at six percent with graduated lower rates for lower incomes.

For those with taxable incomes above $300,000, the tax rate would be increased from six percent to eight percent. Democrats argued that higher-income tax increase would make the proposal revenue neutral by covering the costs for the tax cuts for those below $30,000.

"Asking the folks at the very top to pay a little more, I think has broad-based support in this state and I think is the right thing to do," said the bill's sponsor, Rep. Jon Carpenter, D-Gladstone.

Last year, Gov. Jay Nixon vetoed a tax-cut measure that would have reduced corporate taxes as well as providing an across-the-board cut in income tax rates.

"The Republican train of thought is that if we cut taxes for the super-rich and the job creators that then it will trickle down. We don't believe that," said House Democratic Leader Jake Hummel, D-St. Louis City. "We think that by raising people's wages and their standard of living, that that actually helps the job creators. It puts more money into the pocket of every-day Missourians and it allows them purchase the products they then make."

But one of the Senate sponsors of the Republican's approach to tax cuts said taxing the higher income could hurt the state's economy.

"Raising taxes on the higher income, those are the job creators. Those are the small business owners," said Sen. Will Kraus, R-Jackson County. "If you raise taxes on them, some of them might decide that the taxes are too high and go over to Kansas where they have no taxable income."

Kraus's bill is scheduled for a hearing before the Senate Ways and Means Committee Thursday.

Under his plan, a cut in the income tax rate would be phased in for everyone making more than $9,000 in taxable income -- eventually dropping the tax rate from six percent to five percent over a period of ten or more years.

The measure also contains a phased-in reduction in the income taxes paid by an individual on income from business interests eventually cutting the tax in half. In any one year, the drop in the tax rate would occur only  if state tax collections had risen by at least $100 million in any of the prior three years.

In addition,  the bill would raise personal income deduction from $2,100 to $3,100 for a taxpayer earning less than $20,000 in taxable income and the taxpayer's spouse -- essentially exempting that amount from the state income tax.

Missouri's income tax rates have not been increased since Gov. Warren Hearnes called the legislature into a special session in 1970 to raise taxes after his initial tax-increase bill passed by the legislature was rejected by Missouri voters.

A resolution is filed calling on the state's education commissioner to resign. 01/14/2014

If Nicastro refuses, the remonstrance calls on the state Board of Education to fire Nicastro.

The remonstrance cites several items including advice Nicastro offered to a group sponsoring an initiative petition to eliminate teacher tenure and her efforts in recruiting a private consulting company to provide advice on dealing with unaccredited school districts.

The Senate took no immediate action on the remonstrance that was assigned to the Senate Rules Committee.

Proponents and opponents spent hours Monday arguing before the House Workforce Development Committee legislation to give workers the right to refuse to join unions.

The measure, termed "right to work" by supporters, would prohibit any contract that requires a worker to join a union or pay union fees to obtain or continue employment.

Proponents of the bill argued the measure would make Missouri more competitive in attracting businesses from other states that prohibit forced-union membership.

But St. Louis Mayor Francis Slay told the committee that other factors are more significant in decisions by business in choosing a location.

"Competitive businesses don't go to the cheapest places," Slay said. "They go to the best places -- the places with skilled labor, quality of life, world-class universities, a good transportation system."

On the other side, supporters portrayed the bill as one providing choice and more freedom for workers.

"I believe that we must uphold their right to join a union, join a competing union or not join one at all," said the bill's sponsor, Rep. Eric Burlison, R-Springfield.

For the last several years, divisions within Missouri's business community over "right to work" has contributed to legislative inaction on the proposal.

Nixon defends an appointed threatened with a Senate block over tax cuts. 01/09/2014

Gov. Jay Nixon denied Thursday, Jan 9, suggestions that his appointment of former Rep. Dennis Fowler to the state's Parole Board was a reward for the legislator's support of the governor's tax cut veto last year.

"It didn't have anything to do with any votes on anything," Nixon proclaimed at an news conference. "It had a lot to do with his background and career which has been stellar in both juvenile law as well as criminal justice."

Fowler, R-Advance, was one of 15 Republicans who voted to sustain the governor's veto of the tax cut bill. Members of the group of mostly rural Republicans said they were concerned about the impact of the tax cuts on local public education.

On Wednesday, The Associated Press reported that several senators said they would block Fowler's confirmation to the position to the state board.

Fowler had resigned from the House on December 17, 2013 to take the state job. But the governor's appointment requires Senate confirmation by early February for Fowler to keep the position.

Missouri's legislative session started with a partisan speech from the GOP House Speaker who accused the Democratic governor of failing to lead and then cited a list of issues that Democrats oppose.

"In Missouri, our governor has stood in the way of significant legislation that would provide growth and opportunity for all Missourians," said Rep. Tim Jones, R-St. Louis County. "Our governor has said no to lower taxes and policies that would create a vibrant business environment."

Jones called for passage of the sweeping package of tax cuts the governor had vetoed last year.

The speaker made no reference to the two top issues that have been pushed by Gov. Jay Nixon -- Medicaid expansion and imposing limits on campaign contributions.

Hummel expressed disappointment the bipartisan spirit during the December special session had been lost.

"We came together in a bipartisan fashion. We were working on creating jobs in this state. And it shows we can do it," Hummel said. "That's what people in Missouri want. They don't want this political rancor."

A friendlier, more bipartisan tone was sounded in the Senate where the chamber's two top GOP leaders held a joint news conference with the Democratic Senate leader. Both sides promised bipartisan cooperation.

One day later, Nixon played down the significance of Jones' attack.

Nixon indicated that he would be receptive to some sort of tax cut that was targeted to create jobs and was affordable.

The former chief of staff to the House Democratic leader has been hired by the Republican House speaker to be the general counsel for the legislative body.

Ted Wedel has a long history of work for Democrats including serving as House chief clerk, the top staff position for the House, the last two years that Democrats controlled the chamber. He also served as a top staffer for former Democratic Gov. Bob Holden.

For the last several years, Wedel was the chief of staff for the House Democrats' leader.

"There are few in Jefferson City who have a better grasp of the legislative process and even fewer who have earned such an enormous level of respect from both Democrats and Republicans," Jone said in announcing Wedel's appointment.