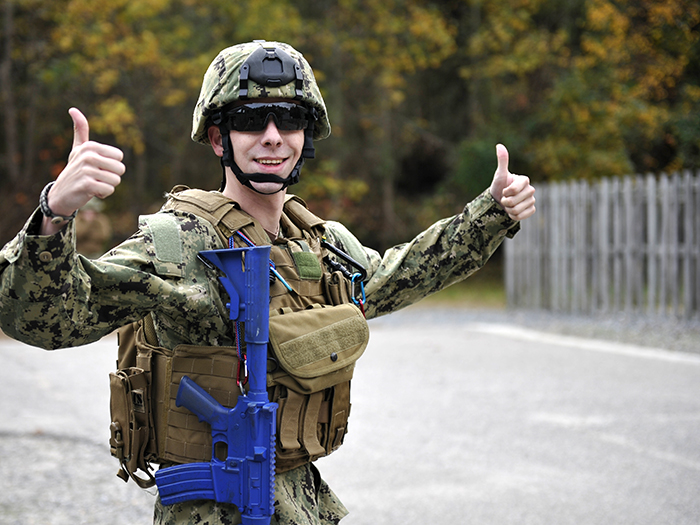 Jeffrey Militzer began his career in journalism in the U.S. Navy.  He first enlisted in September 2006 to be one of the first Mass Communication Specialists the Navy would train.

His first duty station landed him in Gulfport, Miss., working with the Seabees.  Jeffrey's first command was not yet commissioned when he arrived in May 2007.  The 25th U.S. Naval Construction Regiment (25 NCR) would not be commissioned until that September.  His first published story was about the commissioning.

Next year, after being frock to petty officer 3rd class in June, he deployed with Naval Mobile Construction Battalion 133 to Okinawa, Japan.  This was his first deployment.  His primary mission was to cover all public affairs related events until relieved by Chief Mass Communication Specialist Ryan Delcore that September.

In 2009, Petty Officer Militzer deployed with 25 NCR to Kandahar, Afghanistan, where he took on two jobs:  public affairs specialist and watch petty officer of the units Combat Operations Center (COC).

Jeffrey was released from active duty September 2011, however, beginning Oct. 1, he was, and still is, a naval reservist.

Currently, Petty Officer 1st Class Militzer is the leading petty officer in charge of the command training department of Expeditionary Combat Camera (COMCAM) in Norfolk, Va.  He plans, organizes, colaborates, and executes all facets of training department business.  This entails planning the training objectives and exercises for the three to four weeks that reserve personnel meet at COMCAM.

U.S. servicemembers come from a variety of different backgrounds.  We (myself being one of them) come in different shapes and sizes, colors, and genders.  Servicemembers also come from different ethical backgrounds.  What is morally wrong for me might be 'yellow light' territory for another and vice versa.  One of the things we all have in common though is the oaths we took the day we entered the service.

A part of that oath is a willingness to carry out the orders given to us by those who are appointed over us.  Sometimes those orders can cross with our moral foundations.  Sometimes we are called upon to do things we would normally not consider an option.  There are times when our superiors have to give us orders they would not feel comfortable with.  We may be required to kill someone, or multiple someones.

Is it right to order U.S. military servicemembers to kill in the line of duty?

I would argue that it is sometimes right.  My argument is based on the fact that we all chose this career, we have to maintain discipline, and we have an inherit right of self defense.

In this day and time, we are all serving in a 'volunteer' force.  This is to say that none of us were drafted or forced to serve.  When entering into any branch of the armed forces, we are required to take an oath to obey the orders of those appointed over us.  This would absolve us all, at least legally, from actions we are ordered to carry out, provided such orders are indeed legal.  For example, we cannot be ordered to murder or steal.

For the sake of simplicity, lets call the people we could be ordered to terminate the "aggressor" and the inclusive "us" the "friendlies."

A logical question to ask next would be that if we are not able to be ordered to "murder" then how would I explain actual wartime fighting?  After all, that is technically killing someone?  This ideal of thinking would be incorrect.  While yes, someone, meaning the aggressor, would be killed, but the circumstances involved are different.  First of all, the person being killed would have posed a mortal danger to ourselves.  He/she would have had the means, opportunity, and intent to inflict deadly harm on us, or the friendlies we would be protecting.

Let us not forget about discipline within the military.  If we were allowed to choose which fights we were to engage in, and thus leaving the upper-level chain-of-command dependent on our willingness to engage the enemy, then we would weaken our national security.  The whole structure of the chain-of-command works because members follow orders given to them by superiors.  When the order to "mortar that building" is given and the person manning the mortar says, "but what if there are friendlies inside," could cause the unit to miss its target.  The members must trust that the command has already scouted that area and the call would be good.  Essentially, trust in the chain would be broken if we were allowed to determine on our own which orders we will follow.

To quote A Few Good Men, "We follow orders or people die, it's just that simple."  Without strict adherence to orders given there would be total anarchy.

My take on gun control
Posted 02/23/2014:  Recently, I was assigned report on a study showing that the murder rate in Missouri has increased since 2007.  The study by Johns Hopkins University, which has yet to be officially published, is said to show this increase is attributable to repealing the requirement for background checks when purchasing a firearm.

Background checks seem to be the new "big thing" when talking about gun-control.  If the government, or some controlling body, could verify that a person who wants to buy a firearm is not "mentally capable" of responsible use that he/she would be able to be denied purchase.  Thus, people who can't "handle" firearms won't be able to get them.

This kind of reasoning won't work.  My reasoning for this is quite simple:  people who want to obtain firearms for the purpose of breaking the law are not going to follow the law to get one.  What's more, is that every weapon is serialized, and before being sold originally is tested for ballistics.  Meaning, if a weapon is used to commit a crime, it's ballistic "fingerprint" is unique and can be traced to the person who bought it.  In other words, I don't believe someone would use a weapon they bought legally to commit a crime, since it would be traced back to them.  To my main argument, why would a background check actually reduce crime when more than likely, the person committing the crime most likely stole or "acquired" the weapon outside of legal means.

Secondly, there are way more ways to obtain a firearm than going through the usual means, person to person for example.  If I wanted to, I could buy a firearm from my neighbor or from someone in my family.  Both ways do not involve a background check.  What if they bought their weapon from somewhere outside of a normal gun-shop?  There would be no paper trail to follow, except for the original purchase, and then, one would have to talk to each individual that sold the gun in order to find out who has it.  Sometimes people don't remember those kinds of details all to well, especially since there may not have been a paper trail after the first purchase.  Of course, we're talking about modern purchases; what about weapons purchased before even the government tracked them, World War II era for example.  I know of people who have working military issue pistols from WWII and the Korean War.  Once again, there is no background check on these, and there will most likely be no need for them, since none were used criminally.

Ultimately, my point is that background checks and other legislative means of solving the problem of gun-control are quite pointless.  I believe we are moving on the wrong track to controlling weapons.  First of, as previously stated, it is pretty much impossible to regulate every weapon in the United States, let alone Missouri.  Secondly, the people being regulated are people that, more often than not, are intending to follow the law.  More plainly, I believe over-regulation is our problem, not under-regulation.  There are probably people who would like to purchase a firearm for "home defense" that may not have because of the stigma on firearms, or fear of the government tracking them.  Then again, maybe not, who knows?  What I do know is the laws on firearms would certainly affect me and my family because we follow the law, but the people who have made our murder rate increase since 2007 certainly don't need the government's permission to buy or use a weapon.  They prove that day after day.

I'm not saying that what Johns Hopkins University has found is wrong, I'm not saying it's right.  What I am saying is that the study is most likely irrelevant in the grand scheme because no law, no regulation, no amount of background checks, no studies on society can ever compel a murderer to follow the law.

G.I. Bill Issues
Posted 02/16/2014:  Throughout my time at MU, or to be a bit more specific, at least once a month, I must verify my enrollment through the Veterans Affairs department.  This semester, due to a change-up in my class schedule, I had to make some corrections to their records.  In my new statement that was sent to my house, it showed how many benefit months that are remaining on my account as will be available immediately after spring semester.  This number troubled me a bit, though not necessarily in a bad way.

Now, to backtrack and explain the system a bit.  Before a semester starts, a student veteran must submit to the VA the number of credit hours of class they will be attending.  A veterans benefit amount is based on this number.  To be considered a full time student, one must have at least 12 credit hours during a normal semester, 6 during a summer session.  A veteran cannot receive more benefit by going over what is required for "full time" status.  However, this is not the problem.

My issue was with the amount of remaining benefit.  I have 16 more months remaining after this May.  One might say that is a lot of remaining benefits.  They would be correct.  It is more than enough to finish my degree.  The problem is my plans to pursue a Masters degree directly afterward.  In order for this to happen, I must completely exhaust my current G.I. Bill.  I have developed a plan to do this to some degree, but after I ran my calculations, I will still have a little over 30 days left.

Due to the G.I. Bill being a daily system versus a month-by-month system, I will need to find some way of taking a month of something next year.  Right now I am thinking of ground school toward getting a private pilot's license.