JEFFERSON CITY - People caught with small amounts of marijuana in Columbia usually only face a small fine and now a trio of Democratic state lawmakers want to make that the case for the entire state.

A measure was introduced Thursday that would punish marijuana possession not as a Class A misdemeanor but instead as it is punished in Columbia. Just like Columbia's ordinance, the House bill would classify convictions punish posession of less than 35 grams with a fine of no more than $250 and a suspended sentence.

Missouri's current law states possession for that amount of marijuana is punishable up to one year in jail and a $1,000 fine. 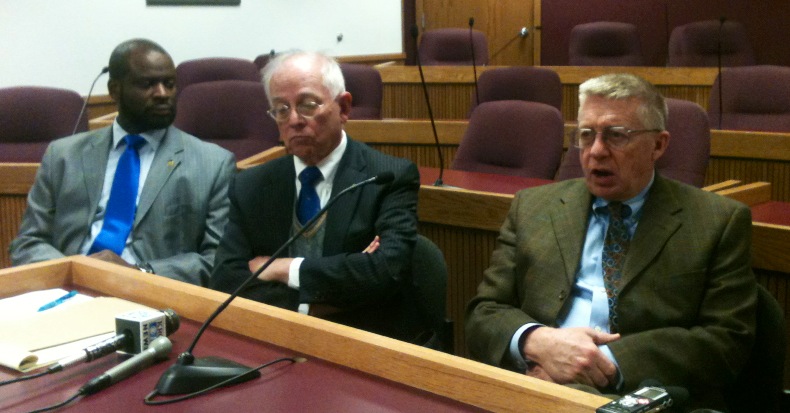 Rep. Chris Kelly speaks at the Capitol in support of a measure to lessen penalties for marijuana possession.

Suspended sentences allow a conviction to be erased from a person's record if they pay their fines, follow orders from the court and stay out of legal trouble for a set period of time.

One of the bill's supporters, Rep. Chris Kelly, said that as a Boone County judge he heard hundreds of misdemeanor cases involving marijuana. Kelly said many university students receive convictions for lesser crimes and those convictions bar them from opportunities, like better jobs, for decades after the fact.

"It's serious, but it shouldn't cloud a person's life forever," said Kelly, D-Columbia. "At some point, society ought to let people up and let them go back to being productive citizens."

Sponsoring Rep. Rory Ellinger, D-St. Louis County, said the bill doesn't legalize marijuana for enjoyment or medicinal use.  He said it's simply removing a charge from your record that is considered a crime which can have lasting effects on the defendant's life if it isn't taken off.

"This is not a radical bill in any way," Ellinger told reporters at the Capitol on Thursday.

The three Democrats who spoke about the marijuana bill said they were concerned about the impact that current state drug laws have on college students. Kelly's district includes all three of Columbia's higher education institutions. Ellinger's territory includes neighborhoods near Washington University-St. Louis. And a third Democratic supporter of the measure, Rep. Clem Smith, represents an area that includes the University of Missouri-St. Louis.

But the idea of softening drug penalties is already getting pushback from conservative lawmakers. Rep. Kathie Conway, the vice-chairwoman of the House's crime prevention and public safety committee, said she fears that lighter penalties could mean more people driving under the influence of the drug.

"I'm not sure I want to put another chemical out there and it's just a slap on the wrist, until we have a better way of detecting it," said Conway, R-St. Charles.

Rep. Robert Cornejo, R-St.Peters, echoed Conway. He said people should be able to decide what they put in their bodies, but should be mindful of the consequences.

"Sometimes when people are under the influence of marijuana, sometimes they do stuff that's harmful to society," Cornejo said.

St. Louis attorney Joseph Bauer said other states have reduced the penalties for marijuana possession and evidence of 40 years has show that marijuana assumption hasn't increased in those states.

Ellinger also introduced another bill Thursday that would expand the list of misdemeanor offenses which can be expunged.  The expanded list would include small amounts of marijuana possession. Ellinger said sometimes those minor offenses are on a student's record for life closing off their opportunities for student loans, graduate schools and good-paying jobs.