There are several buildings that were constructed in the 1930s -- and those are the ones being used to treat the hospital's patients. Staff members said that many other buildings are simply unusable. The hospital still contains buildings from the 19th century. There are bricks falling off of staircases, boarded up windows and a sizable chunk missing from the roof of the old laundry building. 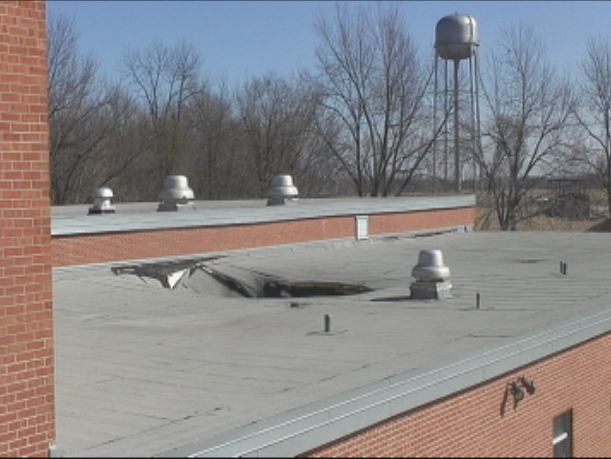 Some buildings have been abandoned altogether. This was Fulton State Hospital's laundry building before the roof collapsed.--Brendan Cullerton MDN

"It's a shame we are using these buildings," said Ken Lyle, the hospital's chief financial officer. "It is the right thing to do to replace this facility because of the safety risk it poses for everyone in the building, let alone to provide space for people to receive adequate treatment."

Help might be on the way for Fulton State Hospital. House Speaker Tim Jones, R-St. Louis, has sponsored a $950 million bond proposal, and one of the items on the proposal is renovating the hospital.

Jones created a special committee to work on the bond proposal, and made Rep. Chris Kelly, D-Columbia, its chair.

Kelly said he has been looking into renovating the hospital since his first stint as a state lawmaker in the mid-1980s.

"The hospital in Fulton is in terrible shape," Kelly said. "Some of that hospital was built in 1880. It's a hazard for our employees. It's a hazard to the patients. It's not good for treatment, and it uses a ton of energy."

Both Kelly and Lyle agreed that there isn't much that can be done in terms of fixing the current buildings. They said the only real solution is to tear down the obsolete buildings and build new ones.

"We're going to have to start from scratch with Fulton," Kelly said. "There are no two ways about it."

Lyle, who has been Fulton State's CFO for the last 20 years, said he has been trying to make these large-scale changes since he got the job. Lyle referenced a 1986 study that concluded starting from scratch  was the best thing to do back then.

"And here we are almost 30 years later, and it hasn't gotten any better. It's gotten worse," Kelly said.

These kinds of changes are not just for aesthetic purposes. Hospital officials said that there is a real danger for the staff of the hospital.

"Many of our buildings were designed to be nursing homes in the 1950s, and now we use them for high security environments for people that are a danger to themselves and others," Lyle said.

One of the maximum security units, the Biggs building, was built in the 1930s. Lyle said the hallways are too long for staff to effectively manage dangerous patients. He also said there are blind spots that can result in some of the patients cornering and attacking both other patients and the workers.

Bob Bax, director of public affairs for the Missouri Department of Mental Health, said the vast majority of the hospital's 300 patients are there because of some sort of court action.

The renovation, however, is no sure thing. The hospital's fate depends on what happens with the near $1 billion bond proposal.

"I have no way of knowing whether or not this will be successful at this point," Kelly said of the bond measure.

Recent bond proposals have not fared well in Missouri. Kelly has proposed some sort of bonding issue for the past five years, but none of them passed.

Although no one has vocally opposed this particular proposal, there are state lawmakers ideologically opposed to bond measures in general.

"I would have to look at this more closely before making a decision on it, but you always need to be careful about trading today's problems for problems tomorrow," said Sen. Will Kraus, R-Jackson County.

Kraus, who voted against Kelly's 2009 proposal, said he dislikes bonds because of the debt they create for the government.

However, Jones said that the exact numbers are not "hard and fast" rules.

"Ultimately, we want to pass a bond measure that the citizens of Missouri would approve of because they are the ones that will actually be voting on this," Jones said.

Another challenge for the bond measure is being put before Missouri voters for approval. Not only would it have to pass both the Missouri House and the Senate, but it would need to then pass a majority vote of the people when it is placed on the ballot.

The earliest a ballot measure could be issued is Nov. 14, 2014, leaving plenty of time before people will know for sure how the situation at Fulton State Hospital will end.