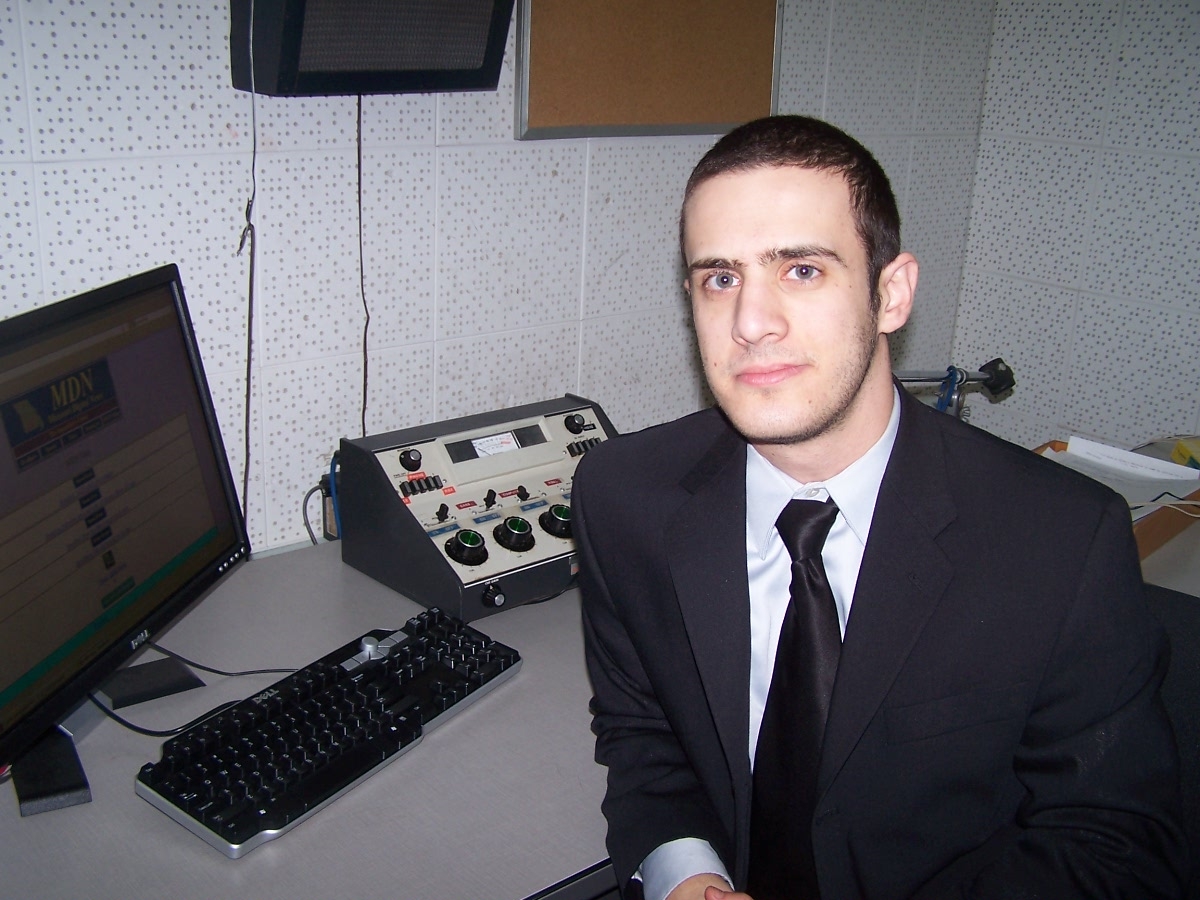 Alon Gilboa is studying Broadcast Journalism and Information Technology at the University of Missouri. He is also minoring in Chinese. Alon grew up in the suburbs of St. Louis and has lived in Missouri nearly his whole life. He joined the newspaper staff in high school, but quickly found that his true passion was in broadcast reporting.

He successfully managed to organize a broadcast program in his high school from scratch. He got his start to journalism work at KMOV, the CBS affiliate in St. Louis, as a Broadcast Assistant. Alon hopes to work someday as a business journalist covering global issues. He began reporting for Missouri Digital News in January 2011.

Today, I learned a lesson in waiting. When at the Capitol, don't sit in the office. There's so much to hear and do. The reason I waited was because 3.5 the House Economic Development committee met only after the House adjourned. However, I quickly ventured to the House and sat and listened. From my Legislative Policy class, I learned that in the beginnings of the country's history, people would go to Congress as entertainment. This was partly because there was nothing else to pass the time back then, but it was also because people found it interesting to sit and listen to people debate about issues they feel strongly about. Sitting there in the House, I felt the similar combination of boredom and fascination I'm sure people felt hundreds of years ago.

What a long day! Four hours in the Senate and the entire time, they were discussing only one bill. I had reported from the House before, but today was my first day in the Senate. The difference between the two was fascinating. The House is large, impersonal and hard to keep track of what is going on. I felt like I was constantly trying to figure out who was talking and what they were talking about.

The Senate was entirely different. It is everything the House is not. With only 34 members, the Senate is personal and easy going. Jokes and stories were mingled with serious policy debate. You could tell the Senators really knew each other well and understood each others positions, no matter the political party.

Another note of interest is the clear lack of technology used in the Senate compared to the House. The House has a large LED screen displaying information and each representative has his or her own laptop on their desk. However, the Senate was strikingly different. No monitor and no laptops. Every amendment was passed around on paper and Senators had large binders on their desks. I found that this helped them stay focused on the policy debate and not on their emails.

I'm glad I got the opportunity to report from the Senate, as my days here at MDN are winding down and the end is near.

Last week, after a rather poor blog post that delved a bit too deep into my own opinion, Phill sat me aside and gave me some valuable insight on the true meaning of journalism. While writing the blog, I got carried away with what I wrote and how I felt. The gist of what he told me was that it’s ok to have opinions but don’t proclaim them to the world with gusto if you’re working for a news organization…especially one that covers politics.

Phill is someone I highly regard and honestly look up to as a journalism mentor. He constantly impresses me with not only his journalism skills, but also his mastery computer technology and programming. So when he gives you advice…you stop and listen.

This week I heard the story of two Jackson County residents who were clearly upset about the gerrymandering going on in their home county. They argued that a finger was being stuck in the county for the 6th District, which would essentially separate much of the Republican voters from the county. In essence, this would create the urban core of Kansas City securely Democrat and uncompetitive.

They said that many of their fellow neighbors are upset that this line is being drawn to politically exclude them from the rest of their county. The couple went on to say that the politicians didn't want to listen and the local media didn't want to tell their story.

Blog #8
Posted 03/18/2011:  Recent events such as the tsunami in Japan, political turmoil in the Middle East, and the danger of debt-loaded countries in Europe have given me pause. It puts into perspective how interconnected the world is through globalization and how fragile our dependence is. Each of these conditions set the conversation for the national economy, politics, and defense.

The tragedy of innocents dying through natural disasters or political upheavals is a terrible thing for any country to bear. However, in this day and age, with video and information technology that allows the entire world to see, it becomes more than a problem for just one country or one region of the world. It is an issue that the world as a whole must deal with. Of course, unifying 190+ countries with wildly varying interests is no easy task. I believe that to deal with future mega-crises like those we have recently witnessed, the world community must continue to try and work together as best as possible to help those in need.

Blog #7
Posted 03/12/2011:  This week was spent working on a feature story about synthetic drugs, including K3 and bath salts. This story will hopefully be ready within the next week or two. With the rise of these synthetic drugs, I ask myself why are they so popular? Is the need for people to get high so strong that they will ingest chemicals in their bodies? Chemicals which have effects that are unknown. I simply don't know. I am hoping to interview some people who use these drugs to really get their opinions on it. For now these drugs are legal. This isn't to say that lawmakers aren't trying to do something about it. They just can't keep up with the onslaught of these new synthetic drugs. They are rolling off the production lines too fast to legislate.  This is an interesting story to keep an eye on in this legislative session.

Week 6 Already?
Posted 03/01/2011:  Time flies when you're not paying attention. I'm already a third of the way done with the semester and the action doesn't stop - not in Columbia or in Jefferson City. The weekly adrenaline of coming to the Capitol at 12:00, getting handed a story assignment by 12:02 and out the door to cover the story by 12:05 is something I've actually begun to get used to and enjoy. I never know what I will cover, and it feels good to know that I become so much more knowledgeable about different issues around the building and around the state.  I am proud of the fact that I can usually make a decent turnaround and finish my story by 5 or 5:30. These are all small accomplishments that I can add to my experiences here in Jeff. City.

This was my first week writing a print story here at the statehouse. It was no big deal, since I wrote for my high school newspaper for several years. In all honesty, it was a nice change of pace from the usual radio reporting around here. It covered a subject I think that all Missourians are affected by in some way: minimum wage. A state senator brought before a committee a bill that would call for 2012 elections on whether or not to peg the state minimum wage to the federal minimum wage.

This would have serious repercussions for those who recieve minimum wage, as the federal wage historically increases slower than the state's wage. Some lawmakers, including the sponsor of the bill and the chairman of the committee, feel that keeping the minimum wage to the lowest possible denominator would attract businesses over the long run. However, the fear is that many people who depend on it, including college students, seniors, and those recently laid off work would recieve the short end of the stick. However, I believe its good that it calls for being brought in front of the people of the state. In the end, they know what is best for them and what kind of legislation they want to see on such a crucial and important issue.

Week 4
Posted 02/15/2011:  Sometimes stories might seem a bit dull when you first receive the assignment, and then get more interesting the further you delve into it. I had that experience today with a story about extending Missourians' access to health insurance to those from neighboring states. As soon as I came into the office, I rushed to the House Health Insurance Committee hearing to hear about the bill raised by Representative Jason Smith. By the time I left the hearing an hour later, I was convinced of just how important this issue really is. Unlike Prop. B, it affects every person in the state and has significant ramifications for the state as a whole.

The argument was that Missourians could save money if they have access to insurance plans from out of the state. However, the real problem is how to deal with the almost 28 million dollars in lost revenue from insurance premium taxes that leave the state if the bill were to pass. This is a dicey proposition for lawmakers, as they must weigh the benefits of individual Missourians with the benefit to the state as a whole. This raises an interesting question - whats more important, the citizen or the state? This is one question I am sure state lawmakers will try and figure out in the weeks and months ahead.

Week 3
Posted 02/11/2011:  This week, I got a story assignment that was more interesting and timely than my last one. It was about the House Agriculture Policy committee and their plans to try and get a bill passed essentially affirming that the state will not put "undue" economic burdens on Missouri's agricultural community as they humanely raise their animals. While this bill is clearly just symbolic, it does raise interesting questions as the bill moves forward. How much is  an "undue burden" when it comes to regulations? And who decides if the animals are treated "humanely", the state or individual farmers?

This bill comes off the heels of the recent passing of Proposition B, which increased regulations on those who raise puppies for sale. Many of the state's rural and agricultural committee widely revile the new law. They say that it was passed only with out-of-state backing and duped urban voters who know little about rural economics.

For the story, I met Representative Ed Schieffer of Troy and he was one of the friendliest people I have met so far in Jefferson City. As an "urban" resident myself (St. Louis), he gave me a fuller picture of the other side of this issue and the effects that it has on rural citizens. This story allowed me to understand that even though an issue might not affect you directly as a reporter, it certainly affects many in the community who depend on your stories and reporting.

A Missing Week
Posted 02/07/2011:  The previous week has been dominated by the record snow storm that hit Mid-Missouri. Around 18 inches fell and the University, as well as the Capitol, shut down. Since I now only work on Tuesdays, the snowfall essentially eliminated my second week. Nevertheless, I am ready to get back to Jefferson City and get back in the swing of things. This week, I plan on increasing my efficiency and rely less on others to get my story done. That is the goal, at least.