JEFFERSON CITY - Facing a state budget crisis and high unemployment numbers, Gov. Jay Nixon made clear Wednesday in his State of the State address that he means business -- and wants to bring more of it to Missouri.

In his annual speech to a joint session of the legislature, Nixon called his plan to bring more jobs to the state his "top legislative priority."

A primary facet of Nixon's proposed plan is to increase tax credits offered by the state to attract new businesses to Missouri. The recommendation was met by mixed reactions from legislators, some of whom worried that the move could jeopardize the state's revenue and burden taxpayers. Meanwhile, state business leaders largely expressed support for the initiative.

In his statements to state lawmakers, Nixon said efforts by the government in the past year have created jobs, helped small businesses and attracted companies to the state. 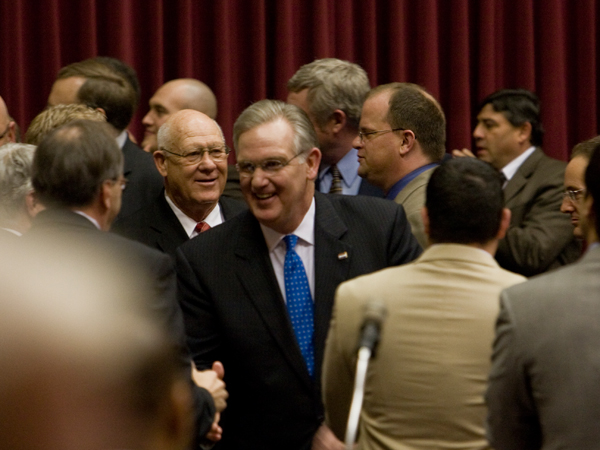 "It's clear that our key business incentives and workforce investments are bearing fruit. But much more needs to be done," he said.

Specifically, Nixon encouraged a three-pronged approach to catalyzing job growth in the state. His recommendations included incentives for Missouri businesses, a monetary boost to the Missouri Science and Innovation Reinvestment Act to attract out-of-state companies and improved job training and re-training in the state.

But Sen. Matt Bartle, R-Jackson County, said tax credits, one of the centerpieces of the governor's proposal, have not experienced the success the governor claims. In fact, Bartle said such monetary incentives have failed in Missouri before and could create an unnecessary hardship for taxpayers.

"Every governor comes in to office and proposes tax credits, and that's why the state of Missouri is having a revenue crisis right now," Bartle said. "We are narrowing our tax base."

Bartle said unemployment in Missouri, now hovering around 10 percent, would have been mitigated had past incentives been effective. But because tax credits have been unsuccessful in the past, Bartle said, there is no reason to believe they will promote economic development now.

Sen. Tim Green, D-St. Louis County, also expressed reservations about the governor's plan. He said efforts to attract companies from out of state could jeopardize the success of Missouri businesses.

"Sometimes we don't worry about how we can assist businesses that have been here."

In his speech, however, Nixon emphasized that his jobs plan would "put Missouri first." The governor outlined a "Missouri First" initiative to reward homegrown businesses with tax breaks and other financial incentives.

The legislation Nixon promoted in his address will face a number of political battles in the legislature.

The bill would require tax credits to be addressed individually by the appropriations committee before being distributed to businesses. He argues his proposal would ensure more tangible job growth from businesses and a more efficient use of the state's funds than the governor's plan by providing a check on tax credits.

"I don't support it," Crowell said of the governor's jobs plan. "I don't think it's wise to issue tax credits without holding people accountable. ... At some point, Missouri taxpayers deserve to see a return on their investments."

"Making tax credits a part of the annual appropriation is tantamount to doing away with them," Fleming said.

"There are some tax credit programs that need to be reviewed," McCarty said. "But if we subject all tax credits to review, companies won't be able to count on that incentive if they come to Missouri."

Both the St. Louis Regional Chamber and Growth Association and Associated Industries, however, spoke out in strong support of Nixon's jobs plan.

"It's hard to do an economic development package with no funding," McCarty said. "Retooling what we already have will be a positive thing."