Part One: At Lake of the Ozarks, a dirty little secret
From Missouri Digital News: https://mdn.org

Part One: At Lake of the Ozarks, a dirty little secret

Date: November 2, 2009
By: Rebecca Berg and Max Reiss
State Capitol Bureau
Links: See the series on Sewage at the Lake

JEFFERSON CITY - At the Lake of the Ozarks, dirty water is a fact of life.

Last summer, high levels of E. coli sparked controversy and forced the closure of two state beaches. But for Lake residents, the results reported this summer were not a surprise.

For years, lake residents and local officials say, septic systems have been draining into the lake where people boat, swim and recreate -- the same lake that attracts thousands of visitors and millions of tourism dollars annually. 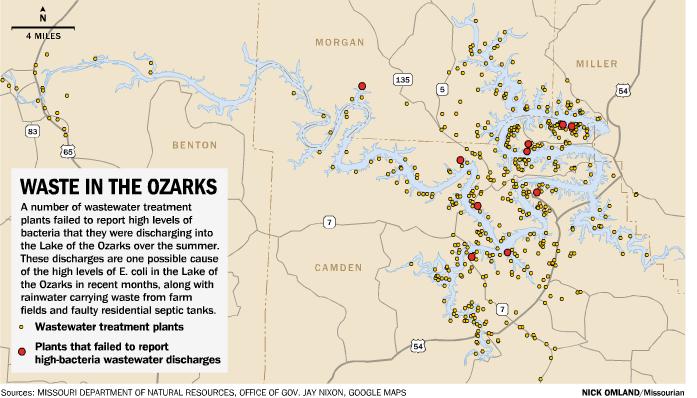 Septic systems are the primary method of on-site, or residential, wastewater management around the Lake of the Ozarks. Although no exact number is recorded, local health officials estimate that tens of thousands of homes around the lake, about 60 to 80 percent, use septic tanks as sewage systems.

And that is exactly the problem.

"The issue at the Lake of the Ozarks, as I understand it, is...you've got a lot of old septic systems," Natural Resources Director Mark Templeton said in a recent interview with Senate investigators. "You've got septic systems that need to be inspected, maintained, repaired, shut down...It's just not a great place to have septic."

Firsthand accounts from local health officials and residents confirm Templeton's assessment. Old septic tanks are leaking or overflowing; homeowners are emptying the contents of septic tanks into the lake; home drainage pipes for septic systems point directly into the lake water; and when it rains, any standing sewage is washed into the lake.

Lake residents like Wesley Nyhaug live with the pollution. Since moving into his lakefront home 11 years ago, Nyhaug said he has seen items such as diapers, driftwood and bags of garbage floating in the lake after storms.

Each summer when Nyhaug and his wife, Constance, play host to their extended family, they let their three grandchildren swim in the lake. This summer, the weather was sunny during the family's annual visit; but, Nyhaug said, "If the grandkids had been here after a rain or something like that, I think by the looks of the water they would have said, 'No, I'm not going swimming today.'"

The pollution visible to the eye constitutes only a fraction of the contamination cocktail in the lake's waters. Toxins include animal and human discharge, commercial byproducts and fuel.

In September, Gov. Jay Nixon announced the Natural Resources Department would begin testing the water for traces of some pesticides, gasoline and other petroleum-based pollutants. And even more recently, an internal investigation by the governor's office confirmed fourteen instances of illegal sewage discharges by commercial wastewater treatment facilities into the Lake of the Ozarks since 2005.

Today, Nyhaug has a 1,500-gallon septic tank that uses a pump system to move wastewater uphill, away from the lake. When he bought his home, however, the property came with a small, old tank that emptied its contents into the lake.

If Nyhaug hadn't noticed sewage draining toward the water, he said, he might not have replaced his septic tank at all. It is a problem that many homeowners at the lake are facing.

"There's really no way to know that septic tanks are in trouble until they have a problem," Nyhaug says. "Then it's too late and they have to be replaced."

The water pollution from failed septic tanks can have tangible effects on E. coli levels in the Lake of the Ozarks.

During the summer, the Natural Resources Department officially said a combination of factors was responsible for unsafe levels of E. coli in the water.

"Runoff from heavy rains may transport waste found in soil from faulty septic tanks or sewer systems, wastewater treatment facilities, large concentrations of waterfowl, and animal waste and manure," said a statement released by the Department of Natural Resources in June.

Publicly, the Natural Resources Department refined its position and attributed unsafe levels of E. coli in the water to a high concentration of geese at the lake.

It is not known whether human or animal waste is the primary cause of E. coli at the Lake of the Ozarks, or whether more wastewater drains into the lake from commercial or residential septic tanks. However, University of Missouri soil science Professor Randall Miles said septic tanks have a major effect on E. coli levels at the lake.

"In some parts of the lake, the largest contribution (to E. coli) may be the wastewater," Miles said. 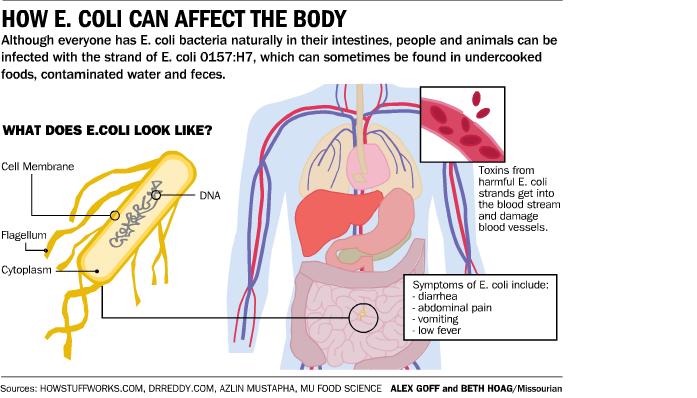 And according to Dr. Michael Cooperstock, medical director of the infection control program at the University of Missouri, E. coli bacteria in the water could lead to illnesses such as hepatitis and various gastrointestinal disorders.

"If there's contaminated water, it may contain...diseases and you would most certainly want to tell people, 'Do not go swimming in that place,'" Cooperstock said.

According to Bee Dampier, a registered nurse for Camden County, exposure to E. coli bacteria in these cases could have come from a number of sources, including "being in the water."

The Missouri Health Department reported 310 confirmed cases of E. coli-based illnesses and two deaths from the dangerous strains of the bacteria in Missouri in 2007 and 2008 combined.

These numbers may indeed be low. Local and state health officials say cases of illnesses in humans from E. coli are often misdiagnosed or go unreported.

The health risks associated with human and animal waste in the water have caused worry among some visitors like Darquita Hoffman from St. Louis, who recently spent a day at the lake with her children.

"It'll make me think twice, because if you're out in the water and you've got to inhale different stuff and smell it, I don't think that's healthy at all," Hoffman said. "I am very concerned now."

Hoffman is not alone in her apprehension. Trent Freegard, the manager of Bridgeport Marina in Osage Beach, said he has noticed more customers inquiring as to the safety of swimming in the lake.

Freegard said he tells tourists not to worry, but to err on the side of caution.

"We've had families come in and ask me about the E. coli and I tell them...to stay out of the areas where the high risk is," Freegard said.

At its core, the issue of failing septic systems today has much to do with the original purpose of the lake.

The Lake of the Ozarks was initially meant to be an energy source, not a vacation destination.

In 1931, Union Electric, now AmerenUE, completed construction on Bagnell Dam. The utility still owns the lake and its shoreline. The lake's dam produces enough hydroelectricity in one year to power more than 40,000 households.

Unlike energy production, limiting development and preventing pollution were not originally priorities at the Lake of the Ozarks.

According to Dwight Weaver, a historian who has written a number of books on the Lake of the Ozarks and has lived at the lake for 45 years, tourism was a small industry at the lake prior to highway improvements in the 1970s. Overall, he said, development has been gradual until recently.

"There has been more big development in the last ten years than at any other time in the lake's history," Weaver said.

As development took off around the lake, oversight of the lake water's environmental quality did not keep pace. It was not until 1996 that the state even began to partially regulate septic tanks, and it took a lawsuit filed against AmerenUE by the state of Missouri to implement regular testing of water quality at the lake.

Water samples were sporadic prior to the 2007 launch of a five-year water quality-testing program funded by AmerenUE under a court settlement. AmerenUE was sued after a massive breach in the Taum Suak Reservoir that spilled a billion gallons of water.

More recently, Gov. Jay Nixon has pledged to clean up the Lake of the Ozarks by increasing water testing and by investigating polluters. On-site septic tanks, however, will not be addressed by the initiative.

Instead, lake residents like Wesley Nyhaug will be forced to wait for relief from a failing sewage system at the lake. For the sake of the environment and the economy of the lake, he said he hopes this relief will come soon.

"I think the governor has a good idea, but I think they have to put more stringent rules and regulations in here with the septic systems," Nyhaug said. "Something has to be done."

Tomorrow, this series will explore specific causes of failing septic systems at the Lake of the Ozarks.